Chaim's Dream from June 2007:
In the Dream Message from the Lubavitch Rebbe, zs'l, I dreamed that I was on top of a mountain. The top of the mountain was flat, it wasn't a peak or anything like that and not too tall. In front of me I saw white slabs or rocks, which were actually parts of a building that had been destroyed violently. Around me, there were some small bushes and green grass. 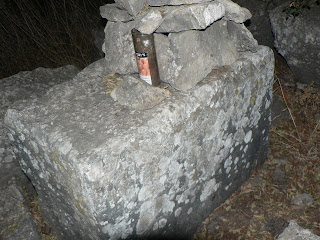 I was talking to an elderly soldier, also dressed in military uniform, among the ruins. The elderly soldier was shorter than me. He had beautiful blue eyes, penetrating yet friendly, tender.

He said to me in Hebrew "hakol muchan, kvar iecholimm livnot" - "everything is ready, we can start building".

Email from Chaim:
On the background, there were some trees, and on the foreground, next to me, to my left, there was a large stone that's very much alike to the one Asher took a picture of. At that point in time in my dream, the Rebbe zs"l, came and said in Hebrew that we could start building.
Now I know why in my dream I was standing at that precise spot.