A very interesting article regarding the Hurvah Synagogue was written by Yeranen Yaakov a while ago that made a deep impression on me.

Yeranen Yaakov wrote that "...Tradition handed down from the Gaon's talmidim. The Gaon, zs'l, had said that the Churvah shul would be built and destroyed twice and when rebuilt a third time, it would be a sign of the coming of Mashiach."

Ever since reading about it, I have been following the progress of the Churba Shul. The shul has been rebuilt again for the third and final time and is almost ready. 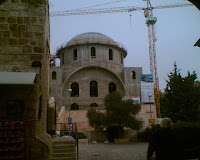