In the dream Nachal Kishon bestowed on my husband on Rosh Chodesh Elul 1, 5767, my husband was told by a Malach (angel) that only Reb Asher knows the location of Nachal Kishon. In the dream, Devorah HaNevia, a'h, appears (out of nowhere) and I asked her, "Respectful thee, where is Nachal Kishon?."

Devorah HaNevia replied, "Ask him (Asher) and what he feels, that's the answer. He'll say that he doesn't know, that he never thought about it but investigate him, he will know."

He found a unique video from 1988 of the Lubavitch Rebbe, zs'l, speaking in prophecy to then mayor of Haifa, Mr. Arye Goral, about the valley and river in Haifa.

“… In Haifa, there is a sea. One shouldn’t become intimidated by something that is deep. This is the uniqueness of Haifa - that it has a sea and that there is a valley and in the valley are precious stones. The Holy One, Blessed Be He, did a wondrous thing; he concealed them in the depths of the earth, and in any case, in the depth of the river….” 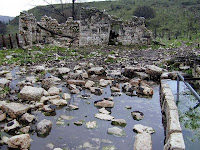 When he returned to the States, he found the site http://www.thirdtemple.com/TribesOfIsrael/AsherNaftali/gallery.htm and this site has pictures of the Kevers of Asher and Naftalia ben Yaakov Avinu, and explains, "The kevers are identified by the Natural spring".

In the dream, my husband saw a hill, approximately 40-50 ft high and its top was flat, and underneath the hill, was a river..." . AMAZING - exactly as shown in the above picture.

In the dream, Asher gave us a big clue how to idenify Nachal Kishon, "The start of Nachal Kishon are from deep wellsprings, and its water arrives into a river and this river enters into Nachal Kishon."

When Asher was in Tel Kadesh recently, his friend took a picture of him but only later realized that IT IS EXACTLY THE SAME SPOT! He was standing on Nachal Kishon!

The Malach also said that Ami's name is fully mentioned in this Tehillim chapter, על מי מנחות ינהלני When switching the letters of עַל-מֵי, it is לעמי - To Ami.

Reb Asher recently said that he realized that his name is also fully mentioned in Tehillim 23:
דשנת בשמן ראשי - When switching the letters ראש, it is אשר Asher. And the שמן Oil is referring to the blessing Yaakov Avinu blessed Asher, "Abundance of olive oil in their portion.". When the Bet HaMikdash will be rebuilt very soon, it will be ASHER that will donate his great produce, the olive oil, to the Bet HaMikdash.

Maybe Reb Asher is the gilgul of Asher Ben Yaakov Avinu, zs'l, and returned in this generation, before the coming of Moshiach because in Shirat Devorah, she says: "אָשֵׁר יָשַׁב לְחֹוף יַמִּים Asher sat still at the coast of the sea."

The Zohar HaKadosh says that this was actually a bracha (blessing) from Devorah HaNevia. Asher dwelt by the seas because he had financial abundance and was able to use the money and physical wealth for chesed and tzedaka, and to donate.