Reb Asher just returned from Eretz Israel and found remarkable discoveries in Tel Kadesh.
After capturing Eretz Israel and dividing it, Yehoshua bin Nun, zs'l, settled in Kadesh Naftali, (now known as Tel Kadesh) and build a Bet Midrash. The above picture is the remnant wall of the Bet HaMidrash that Yehoshua bin Nun, zs'l, built approximately 3,715 years ago (in the year 2053) and where he spent the rest of his life learning and teaching Torah. Barak ben Avinoam, zs'l, Devorah Hanevia's husband, also lived in Tel Kadesh. Meforshim say that he merited to marry Devorah HaNevia in the zchut of serving Yehoshua Bin Nun, zs'l. 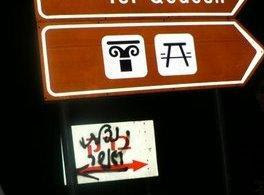 
The above are the remains of the house structure where Asher and Naftali bnei Yaakov Avinu are buried. 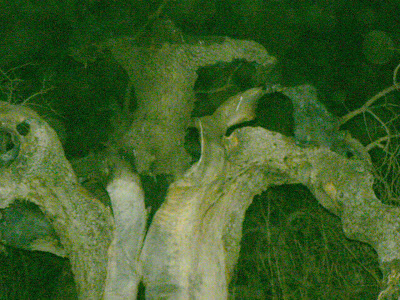 During the Lebanon War II, a kassam flew into Tel Kadesh and the very very old tree took the hit, thereby saving all sacred burials and structures. This tree is located on the left side of Kever Devorah Hanevia. Further along on the left, are the remains of Yehoshua bin Nun's Beis Midrash. 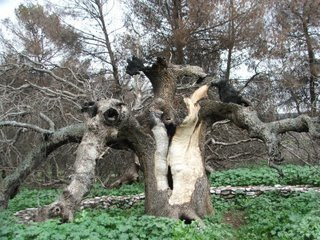 From the hit of the kassam, the tree's trunk became totally hollow and a shape of an ox emerged, among other interesting images.

The Zohar HaKadosh says that Moshiach ben David is the 'lion'; and Moshiach ben Yosef is the the “ox”, symbolizing the Gevurah (strength).

Both Yehoshua bin Nun and Devorah HaNevia were from the tribe of Ephraim.

HKB'H will join the 'tree of Yosef' (Moshiach ben Yosef) and the 'tree of Yehuda' (Moshiach ben David) and will make them into 'one tree'. As it says in Sefer Yechezkel HaNavi, zs'l, chapter 37;19
הנה אני לקח את עץ יוסף אשר ביד אפרים, ושבטי ישראל חברו; ונתתי אותם עליו את עץ יהודה, ועשיתם לעץ אחד, והיו אחד, בידי.
'I will take Yoseph's stick, which is in Ephraim's hand, and the tribes of Israel associated with it, and I will put them with Yehudah's stick. I will make them into one stick. They will be one in my hand.'