It's REAL and it's HAPPENING 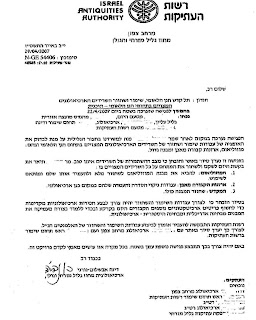 It is a tremendous zchut for us to be part of building a Tzion for Tzadika Shofetet Nevia Devorah HaNevia, a'h.

With much chasdei Shamayim, today we received the draft agreement from Misrad Hadatot in conjuction with National Parks of Israel and the Israel Antiquities Authority stating that the land on Tel Kadesh is ours to build for Prophet Devorah HaNevia the long-awaited, over 3,000 years, Tzion.

This all began at the eve of the first lighting of Chanuka candles, 25 kislev. Exactly 5 months later, 25 Iyar, we are receiving the needed documents to begin the building of the Tzion, chasdei HaShem. What I never wrote on the blog, I'll reveal now. When I was in Kever Rochel Imenu, a'h, Rochel Imenu 'told' me to go wake up Yosef and I understood that the mission is to go into Sh'chem and wake up her son, Yosef HaTzaddik, zs'l.

As much as I tried to get into Sh'chem, it was impossible. In Ma'arat HaMachpela, I found a group of Breslevors whom were going to Mitzpe Sh'chem but they were not willing to take me with them. While I was debating how to get into Sh'chem, HaShem sent me a message to find Kever Devorah HaNevia, a'h. It was only after we were zoche to find her in Tel Kadesh and I returned to the States, that I was told that the mission to wake up Yosef was successful and this was the mission. She was Yosef; MOSHIACH BEN YOSEF.

We cannot begin to translate our feelings of so much gratitute to HKB'H to allow us and zoche us to be part of building the Tzion for Ima Devorah HaNevia, a'h. THANK YOU FOR PARTICIPATING IN THIS TREMENDOUS MITZVAH - We are still collecting and need more donations...Renovations of Kever Devorah Hanevia, a'h.

May this tremendous chesed merit you for the Geula Pratit and Geula Klalit. May it strengthen you with faith in HKB'H and may the merits of Yosef HaTzadik, zs'l, whose Hillula begins tonite, and Ima Devorah HaNevia's protect you and yours. And let us merit speedily to salvation from heaven, with the builidng of Devorah HaNevia's Tzion with the coming of Moshiach Tzidekenu, amen. CHASDEI SHAMAYIM.