As per Tamar Yonah's request, the following true story was told by the Rabbi of the shul ...

After serving 3 long years in the Israeli army, he decided that it was time to travel the world and experience the freedom he so desperately needed. He packed his bags and kissed his family goodbye. At the airport his father handed him his Tefillin (phylacteries) bag and told him that even though it's been years since he last put on his Tefillin, he should start putting them on every day and this will be his protection. The son promised his dad that every morning regardless where he will be, he will put on the Tefillin. 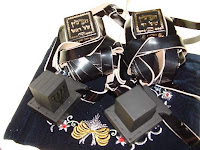 A week passed, 10 days passed, 2 weeks passed, and finally the son called his family to let them know that everything's ok. His dad asked him if he puts on the Tefillin and the son assured his father that it's the first thing he does upon awakening up. The son continued with his travelling and from time to time called his family. In every phone conversation the father asked the son if he puts on Tefillin and the son would answer the same thing every time, "Yes father. I put on the Tefillin every morning".

Three months went by and the travel money was dwindling. The son called his father to send him more money and the father wanted to know if the son was putting on Tefillin. The son got angry at his father for asking the same question every time and hung up the phone angrily. Having no choice and no money, the son returned to Israel feeling that the sudden slash of his travel experience was his father's fault and decided that he is no longer speaking to his father.

A day after his return to Israel, his father asked the son if he put on Tefillin and the son yelled at his father that he puts it on everyday and to stop asking him the same question all the time. The father asked his son to give him the Tefillin bag and the son angrily handed it to him. The father's hand was shaking as he opened his son's Tefillin bag and suddenly out of the bag he pulled out a bundle of money. The father told his son, "If you would have put on the Tefillin as you said you did, you would have found the $5,000 I sent you for additional travelling expenses".

Since that day the son attends daily morning prayer and puts on his Tefillin. He hasn't missed one minyan since...