One Jew in India

Shabbat Parshat Lech Lecha in the year 5742, the revered Admor Sanz Klausenberg Rebbe, zs'kl, gave a shiur and during the shiur he foresaw the murder of the Kedoshim in Mumbay...

"Even one Jew that lives wherever in the world, amongst thousands, millions, or hundreds of million non-Jews, they know that there are Jews that do not believe in the the cross and neither in the bastard Muhammad, imach shemo. That in itself is a tremendeous thing. 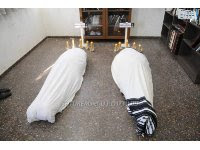 "A Jew sanctifies HaShem wherever he is. Blessed HaShem wants all the non-Jews to know that there is one nation that does not belive in idols. The Gemara writes it explicitly and this is the purpose of the exile.

"Jews arrive everywhere, and one lone Jew lives in India! It is only one lone Jew and millions of non-Jews know about him. They speak about this Jew, and inquire... did they kill the Jew??? Is the Jew still alive???
כל זמן שהמשיח לא בא מדברים יותר מהיהודי!" "
http://www.bhol.co.il/news_read.asp?id=7580&cat_id=1