In the Summer of 2007, Daniel and Binyamin warned that Russian Jews should leave Russia ASAP. Daniel, "I'd say to all Jews to get out of Russia, as fast as possible." "..It's very beneficial for all Russian Jews to run away from Russian in the near future, while they still have the chance." " It is clear that Russia, the dangerous bear, has raised his strong head and wants to swallow the world."

On Friday, 2008 August 01, a total eclipse of the Sun travelled from Canada, thru central Russia, ending in China. The eclipse of the Sun has traditionally been viewed with dread by the Gentiles over the ages. Solar eclipses don't often pass over populated areas, but when they do, they appear to have significant disruptive effects on the people and nations concerned e.g., economic or political crises, civil unrest.

RUSSIA BOMBS GEORGIA
The fighting broke out when much of the world's attention is focused on the start of the Olympic Games and many leaders, including Russian Prime Minister Vladimir Putin and President Bush were attending a luncheon for world leaders hosted by the Chinese president.

The situation has deteriorated rapidly in the last twenty-four hours and fighting along the border has broken out. Russian jets reportedly bomb Georgian military airbase. Georgian tanks and infantry, aided by Israeli military advisers, captured the capital of breakaway South Ossetia, Tskhinvali.

Israel owns a strong interest in Caspian oil and gas pipelines reaching the Turkish terminal. In recent weeks, Moscow has repeatedly demanded that Israel halt its military assistance to Georgia, finally threatening a crisis in bilateral relations. Israel responded by saying that the only assistance rendered Tbilisi was “defensive.” This has not gone down well in Russia. Therefore, as the military crisis intensifies in South Ossetia, Moscow may be expected to punish Israel for its intervention. Meanwhile, Russia is baiting Israel to act against Iran. In response, 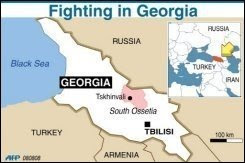 Israel threatened Russia if it goes through with the sale of its most advanced anti-aircraft missile system to Iran, Israel will use an electronic warfare device to neutralize it and as a result present Russia will be vulnerable to air infiltrations.

Georgia is located on the Black Sea coast on the border of Turkey. What does all this mean for us? For prophecy observers, The Vilna Gaon, zsk'l, says that when Russian weaponry enters Turkey territory, get dressed in Shabbat clothes in honor of the coming Moshiach.