Message of the Rainbow

HaShem created a flood that lasted for forty days and nights in order to purify the world from its inhabitants. When the flood waters subsided, it wiped clean of sentient life, with the exception of Noah, his family, and the animals. HaShem established a covenant with the world not to destroy it by flood again. The sign of this covenant is the rainbow.

The Talmud (Chagiga 16a) lists a series of items that one may not stare at, and for which the penalty is blindness. These items include the moon, the hands of the kohanim (priests) at the time of their blessing the congregation, and the rainbow. One who stares at these forbidden items, says the Talmud, "has no compassion for his Creator."

In fact the Shulchan Aruch 229:1 (Code of Jewish Law) states clearly that, "one who sees the rainbow amidst the clouds, makes the blessing, "blessed are You, G-d Lord of the Universe, Who remembers the covenant, is faithful regarding the covenant and fulfills His word", and it is forbidden to stare at it further.

When one sees a rainbow, it is a direct message from HaShem to rouse to do Teshuva (Sforno, zs'kl). 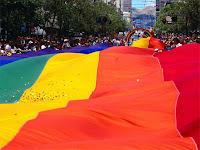 Is it any wonder that the gay movement chose the rainbow as its symbol? HaShem is LOUDLY telling these people - DO TESHUVA or else suffer the consequences. The colors of the gay pride flag are red, orange, yellow, blue, green, and lilac. Each color signifies a separate metaphysical mode: Red is the attribute of harsh judgment...

According to our Sages, no rainbow appeared during the lifetime of Rabbi Shimon bar Yochai, zs'kl, as his righteousness sweetened all Divine judgements.

Unfortunately, the world does not understand HaShem's message and the world's population had become twisted and depraved beyond repair.

For those that do see the message, we can clearly understand what Kadosh Tzaddik Rav Avraham Azulai, zs'l, writes, "At the end of the year 5,760 (the latest possible date of 5760 is end of 5769) since the creation of the world, the Pasuk from Zechariah 13;2 "וְאֶת-רוּחַ הַטֻּמְאָה, אַעֲבִיר מִן-הָאָרֶץ and the unclean spirit to pass out of the land" will occur.