Hidden Till HKB'H Opens Our Eyes 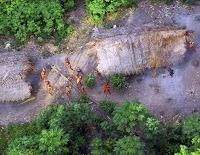 A lost Indian tribe has been recently found and photographed in the Amazon - with the astounding images showing warriors painted bright orange and brandishing bows and arrows. The aerial photos of the tribe in Brazil near the Peruvian border are rare evidence that such groups exist and that these tribes have been living undisturbed for centuries.

Till today 'intelligent' investigators mocked us, the Jewish nation, that we believe without a doubt that the lost 10 tribes are living in exile, on the other side of the Sambatyon and are also waiting for Moshiach so they can return to our Holy Land. Investigators always claimed that such tribes do not exist. They claim that since satellites are placed in every corner of the world, they are able to photograph anything unique. Their second claim is travelling around the world is easily accessible and therefore, every hidden corner has been investigated and according to them, nothing is hidden. 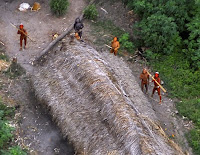 These photographs prove that an unknown tribe has been living undisturbed for thousands of years totally disconnected from our modern world; regardless of the many people that investigated the Amazon for years, and despite all the modern satellite equipment.

Now investigators admit that there is a possibility that there are more unfounded tribes living in our world undisturbed and are completely disconnected from our modern world.

We have always been taught that הכל בחזקת סומין, עד שהקדוש ברוך הוא מאיר את עיניהם everything is hidden, till HKB'H opens their eyes. A person can only see what HKB'H allows to see. If HKB'H does not allow us to see the Sambatyon river and the lost 10 tribes, it does not mean that it does not exists. The same with Moshe Rabenu's (zs'kl) burial - HKB'H does not allow us to find his burial ground, but that does not mean that Moshe Rabenu is not buried...

ChaZaL writes many things that are mysterious to us because they knew things with Ruach HaKodesh. It is known that anyone who denied ChaZaL's truth and laughed at the truth, turned into dead bones, r'l. Where is Shor Habar? Where is the Livyatan? Where is the entrance to Gan Eden? Where is the entrance to Gehenom?. All of them are in this world, the world we are living in but we cannot find it because HKB'H does not permit us to see them. We believe, without a doubt, that all exists, just as ChaZaL says it does, but we are blind till HKB'H opens our eyes.

For all the doubters of the truth, the finding of the hidden tribe in the Amazon despite the age of technology is very strong proof that everything CHaZaL says is the absolute truth. We don't need proof from from bored investigators and photographers that CHaZaL is right. But sometimes HKB'H wakes us up in His wonderous ways to awaken our belief in the truth.