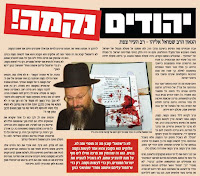 It's been 2 weeks since the massacre at Mercaz HaRav and we didn't hear any talks of revenge. Something in the decision-makers is damaged. Revenge used to be a basic part of Israel's policy. Every 'fedayeen' (terrorists previous name) operation resulted in revenge. This is what the army unit 101 did in Gaza and its areas. That's how they stopped the grenade explosions in cities in southern Israel. This is how they operated against murderers driving on the bus towards Eilat. This is how they stopped the theft of farms in Gush Katif.

Today, they forgot this power. They throw rocks on soldiers without fear, every suicide becomes a 'shahid'. Anyone that murder a Jew brings great honor to his family.

A state that is concerned about her citizens has to hang the 10 sons of the terrorist on a high 50 ft. tree for everyone should see and fear.

You must call it by its name. Revenge, revenge, revenge. You must not forget. Revenge on the massacre they did to Yeshiva Mercaz HaRav. I am not speaking to private people, I am speaking about the 'state'. The government must hurt them till they yell out, 'enough', till they lay on the ground and scream, 'help'. This drive is not for the purpose of revenge but rather to frighten them. The vengeance must be so painful until it will scorch our enemies and haters till they realize that Jewish blood is worth more than gold. A revenge is necessary on such a large scale till it will reverberate in the entire world.

I already foresee skepticism from the 'noblemen' and words such as, "barbaric," "it's not ethical," "Rav," "instigator," and the rest of boorish vocabulary coming out of their throat. Don't even take them into consideration. According to them there will be no Israel within 30 years. They already provided their children with foreign passports. We will stay here, we will live amongst people that clearly understand the language of revenge.

The 'leftists' do not determine what is ethical or not. HKB'H rules and HaShem said לעשות נקמה בגוים do revenge to the nations. It is HKB'H that brought the Egyptians to the seashore in order to drown them. It was only for the purpose of revenge so everyone will see and fear.

Remember. According to the Torah, "revenge" is not a coarse word. ChaZaL tell us that revenge was placed between the 2 letters of HaShem. The Gemara says "אל נקמות ה' אל נקמות הופיע". It is only between 2 friends that revenge is prohibited. When a state avenges, she is praised.

Every state in the world avenges when damages is done to her, including the USA, Turkey, India, Europe and Russia. Even the third-world avenges. How is it that the whole world is wrong and only the 'Israel leftists' are right?