Identifying the site Tel Kadesh and its history:

Tel Kadesh (near Lebanon's border), was a consecutively populated site situated in the center of the mountainous upper Galil for 5,500 years. Originally it was the city of Cana'an that turned to an Israel fortress and is located in the property of Naftali (zs'l). (יהושע יב, כב; יט, לז).

It was also one of the 6 cities to turn into Cities of Refuge in Eretz Israel. The Cities of Refuge were towns during the Kingdom of Israel and Kingdom of Judah at which the perpetrators of manslaughter could claim the right of asylum. According to the Talmud Bavli (מכות ט, ב – י, ב), the city of refuge, Kadesh in the upper Galil, was situated opposite the Golan Heights, and there were specific paths leading to Kadesh, with signs, to ease the perpetrator of manslaughter to arrive safely.

Contradictory to what was thought in the past, Kadesh was not the place of residency of Barak ben Avinoam, zs'l. Agreed by most researchers, the city where Barak ben Avinoam lives was in the lower Galil, south of Tiberias (nearby Mount Tabor, where the war against Sisra took place).
Kadesh in the upper Galil was one of the cities captured by King Tiglath-Pileser III. He overran Israel, and deported the inhabitants to Assyria. Tiglath Pileser III was succeeded by his son Shalmaneser V, whom exiled the lost 10 tribes...

Since the fall of Kadesh, it became a non-Jewish settlement, the center for idol-worshipping. During the time of the Maccabean Revolt, the city served as an important army base for the Roman-Syrian army. 60 years later, King Hordus (known as Herod) fought for Kadesh.

During excavation in Keren Naftali at the end of the '90, a kosher Mikveh was found, and it is presumed that the Chashmonaim built it. This is the most ancient Mikveh ever to be found in the Galil, and in whole of Eretz Israel.

King Titus also arrived to the city of Kadesh in the year 68 with his army and settled there. During the era of the Mishna and Talmud, Kadesh served as a central christian city in the upper Galil. It is assumed that during this era, no Jews resided in Tel Kadesh (no traces of a shul was found).

In the time of the Ga'onim, when Kadesh was the central and capital city under Muslim control, a few Jews returned to Kadesh. Rabbi Yitzchak, zs'l, wrote, "The number of Jews in Kadesh was minimal, most lived there only to protect the graves of the Jews and to welcome Jewish guests wishing to visit the holy graves".

The city of Kadesh became totally isolated, without residents, during the late years of the Middle ages.

After winning the war against Sisera, Devorah HaNevia and Barak, her husband, sang the song of victory, Shirat Devorah, praising and thanking HKB'H. It says in the Gemara, פסחים קיז.
"Devorah and Barak said the praise (Song of Devorah) at the hour when Sisera stood over them".

Rabbi Menachem Perez HaChevroni, zs'l:
"I went to to Tel Kadesh in the Galil and I saw Kever Devorah HaNevia, and she is buried in the Galil"

רבי יצחק חילו, ה"א צ"ג Rabbi Yitzchak Chilo, zs'l:
"Kadesh is Kadesh Naftali as is written in the book of Judges 4. Very few Jews lived there, only to upkeep the graves of the Jews and welcome guest coming to pray. In the graves are buried Barak ben Avinoam and his wife, Devorah HaNevia"

Sefer, Igeret Yechus Avos:
"The city of Kadesh is Kadesh Naftali, the burial ground of Barak ben Avinoam and his wife, Devorah HaNevia"

Sefer, Igrat Yachasuta:
"Kadesh is the location of the Bet Midrash of Yehoshua bin Nun and nearby, are Devorah and Barak ben Avinom"

Rav Moshe Yerushalmi, zs'l:
"In Kadesh, underneath the village are buried Devorah and Barak ben Avinoam and a large stone is placed on them"

Shavchei Yerushalayim:
"Kadesh is where Devorah and Barak are, and on top of them are large stones".

Tov Yerushalayim:
"Kadesh, in Arabic, Kadis, near לניאס, are the graves of Barak ben Avinoam and Devorah HaNevia... and on top them are etched large caves".

Near the wellspring and the antique synagogue, which was called "Midrash Yehoshua bin Nun", the Jewish mausoleum (structure of upper burials) (in the Gemara, it is referred to as "Nefesh") 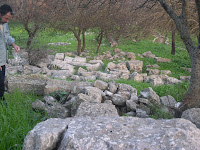 where Devorah HaNevia, Barak ben Avinoam, and Yael, a'h, were buried in alcove graves, was intact.

According to drawings we have from the 1900's, it is possible to reconstruct the mausoleum and save the Tzaddikim's graves that are buried there in disgrace.