Message of the Dove II

Yesterday, Jan. 8, at 4:10 pm, a few Torah students headed towards the Rosh Yeshiva's office, HaRav Meir Tzvi Bergman Shlita, in Yeshivat Rashbi in Bnei Brak to discuss Torah matters. On their way to his office, they saw a pure white dove repeatedly knocking with determination outside the Yeshiva's windows. "We saw that she was trying to enter the Yeshiva thru the windows and thought she was cold. We told the Rosh Yeshiva, but he replied, "Gurnish (it's nothing)". "The dove continued banging against the windows and the Rosh Yeshiva said again to us, "Gurnish (it's nothing)". 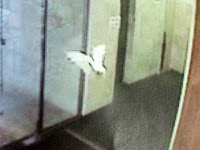 "Suddenly the dove entered the Yeshiva with loud noises and the students tried getting rid of her. The Rosh Yeshiva said these students to stop because it's causing her pain (צער בעלי חיים).

One of the students noticed that placed in the mouth of the dove was a parchment note and told this to the Rosh Yeshiva. While they were speaking, another student came into the Rosh Yeshiva's office and told the Rav that he just returned from the Kever of HaRav Eliezer Menacham Shach, zs'l, and saw this same dove, with a parchment note in its mouth, on top of Rav Shach's kever.

A short while later, they saw the dove flying out of the Rosh Yeshiva's office and instantly, dropped dead on the steps of the Yeshiva. This time though, the parchment note was not in her mouth.

HaRav Gershon Szeilzon Shlita, "One of the students has the parchment note. No one knows what it said on the parchment note, except that it contains holy names of HaShem, and it was written in קולמוס quill pen, in the shape of Torah letters. A few who saw the written parchment note said that among other messages, the parchment note also said, "David ben Rochel will die". Most think that this is a boycott חרם on a certain person.

The Orthodox community believe that the soul of a Tzaddik is reincarnated in this world to find its Tikun and therefore, the dove turned to a Tzaddik to help her correct the soul.

Another amazing similar story about a white dove coming to Rav Ovadia Yosef Shlita can be read here.