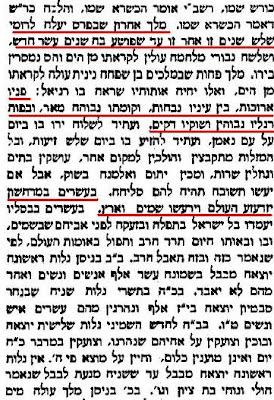 Sefer Eliyahu has a remarkable description of the End of Days thru a conversation between Eliyahu HaNavi zachur latov and Malach Micha'el. This was written 2,000 years ago!!

Highlighted in red:
"The last president of Iran (Paras) will go up to Roma (America) once a year for three consecutive years. A King of a lesser level will come towards him from the sea, and these are his signs, as Daniel describes: His face is long, his leg's foothold are tall and his calves are thin..."

"...He will shoot with guns on the loyal nation ....But if they do Teshuva, they will be forgiven."

"On the 20th of MarCheshvan (November 1 of this year), the world will be shaken and the earth and sky will quaken." 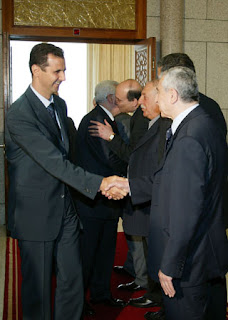 "Iranian President Mahmoud Ahmadinejad's plan to attend the U.N. General Assembly's annual session in New York City. This will be the third consecutive year that the controversial Iranian leader has attended the gathering. In 2005, just a month after he became president, he arrived after some debate over whether the State Department would issue him a visa..."
http://www.crosswalk.com/news/11554434/

Pay attention to the description given about the the other king of a lesser level: Syrian President Bashar al-Assad:
"His face is long, his height is very tall, his leg's foothold are tall and his calves are thin..."

Thanks to the site http://www.myib.co.il/include/312.doc for bringing Sefer Eliyahu's prophecies to our attention.

Sefer Eliyahu continues to say what will happen... (The above is on page 44) at http://www.hebrewbooks.org/root/data/pdfs/AS/ozarmidrashim.pdf .
Available also in English at Medrash Sefer Eliyahu, thanks to Dov Bar-Leib of End of Days.

But NOW, we can all see the amazing connection:

This is the SAME Tehillim chapter that the Malach told my husband in the dream Tremendeous Rewards. The Malach told him that this Tehillim chapter contains the initials or names of the people that donated and will donate for the building of the Tzion for Devorah HaNevia, a'h. The Malach said that all these people will be tremendeously rewarded, even those that donated not Leshem Shamayim (sake of Heaven).

The secret to survive Gog uMagog is written in Tehillim chapter 23, just as the Malach told my husband - All that donated and will donate the Tzion for Devorah HaNevia, a'h, will be tremendeously rewarded.