Shemita is a commandment from the Torah that instructs those living in Eretz Yisrael to stop farming and cultivating their land once every seven years. This is a type of Shabbat/Sabbath for the land - just like we rest on the seventh day, the land rests in the seventh year.

The Torah teaches us that when the Jewish People keep the mitzvah of Shemita, G-d will make sure that the crops from the previous year last us through this seventh year of Shemita, as it says, "I will command my blessing to you in the sixth year and I will produce a crop sufficient for three years" (Bamidbar 25:21). During the Shemita year especially, we learn to trust in HaShem, for He will give us what we need. 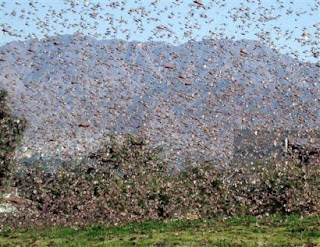 In the Shemita year of 1959, there was a major invasion of locusts and swarms of locusts from Africa hit Eygpt and then crossed the Red Sea and spread all over the land of Israel. It was the worst locust plague to hit the Holy Land, devouring crops, leaving palm trees bare, and wiping out entire gardens.

One of the few farms in Israel that meticulously guards Shemita and does not work the land on the seventh year is the religious Moshav of Komamiyut. Moshav Komamiyut is located in the Negev and is minutes away from the Red Sea.

On Friday 1959, as the swarm of locusts got closer to Moshav Komamiyut, one was unable to even see the skies, for it was covered by the locusts. The residents of Komamiyut were afraid of the great danger that all they sowed in the previous year will be eaten by the locust. When the locust began landing onto the fields, miraculously, they stopped short on the border of Moshav Komamyiut, as if an invisible hand stopped them from entering this specific field. The swarm of locusts made a sharp turn towards all the neighboring fields and ate every blade of grass, devouring crops, and wiped out entire fields in the region.

They never touched even one blade of grass in Moshav Komamyiut, in the merit of observing Shemita. ישועת ה' כהרף עין.