HaShem Will Fight For You

This is a little odd isn't it? In the Arabian Sea, a cyclone, cyclone Gonu, at this time of year?
Cyclone Gonu, packing winds of up to 260 kilometres an hour, advanced on Tuesday towards the oil-producing Gulf state of Oman where it was expected to make landfall within 24 hours.

Thousands of people fled low-lying areas Tuesday as the strongest cyclone to threaten the Arabian Peninsula in 60 years barreled toward the oil-rich Persian Gulf—with southern Iran next in its path. 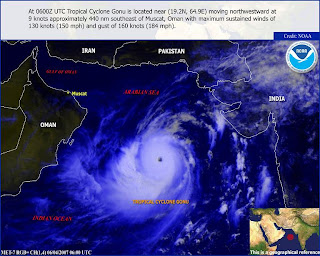 Cyclone Gonu was expected to skirt the region's biggest oil installations. "If the storm hits Iran, it's a much bigger story than Oman, given how much bigger an oil producer Iran is," said Antoine Haff of FIMAT USA, a brokerage unit of Societe Generale. "At a minimum, it's likely to affect tanker traffic and to shut down some Omani oil production as a precautionary measure."

Gonu, which means in Hebrew to be denounced, to be condemned, is predicted to brush by the east coast of Oman and head to the Gulf of Oman, with heavy rains and strong winds forecast over the country to its capital, Muscat, Washburn said. The cyclone was expected to hit land in southeastern Iran late Wednesday or early Thursday, Washburn said.

One thing comes to mind. How many silly people will continue blaming this on global warming?
Yesterday Iran was threatening Israel would see his last days, c'v.
HKB'H WILL SHOW THE WORLD NOBODY THREATENS HIS BELOVED!!!!!!!!!!!!!!