After returning from Israel last summer and fighting the disengagement, I changed a lot. "Things" that seemed very important in the past had no value. My husband claims that fighting for Gush Katif's survival helped me to do Teshuva. To see 10,000 Jews being thrown out of their homes for no reason by other Jews has its effects, without a doubt.

The time I was in the Gush coincided with family guests from France and Israel. When I returned home, it was a houseful of guests, b'h, and I needed to quickly "switch back" to take care of my family. But there was one guest I did not sympathize [+/-] show/hide text
- a week old kitten. One of my nephews picked her in the street, because he "felt bad for her".

When we are at home, we always leave the front door open and anyone can walk in or out. It's probably an Israeli thing to 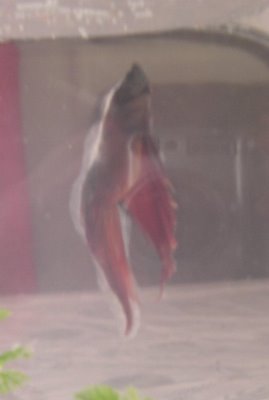 do but I like this "tradition" and b'h, was never harmed from this. The cat also liked this idea and unnoticably, walked out into the street. A car ran her over and she died. I didn't give it much thought but my youngest was weeping like he just lost his best friend. To compensate him, I bought him a fish. A small tropical fish and told my son that a fish is the "safest" cuz he'll not be able to walk out of our home and get killed. This was August 2005.

I was sure the fish will die after a week, a month - 3 months but the fish continues to live, till today. At some point, I told my husband that the fish will die right before Moshiach's arrival. My husband laughed in a good way and said "we'll see". Before Vav Av (July 31), the fish was supposed to die, according to the calculations of the pasuk. But guess what? 4 days prior to Vav Av, my kid's camp had a carnival and my son won a fish. He brought it home and was so excited. 3 days later, the fish died. I said to my husband "Look how HaShem works in mysterious ways. Who'd have ever thought we'd have another fish that will die right before Vav Av?".

So it it didn't matter that "my" fish didn't die, another fish died and that means Moshiach will arrive Vav Av... But Moshiach did not arrive Vav Av and lehavdil, the fish continued living.

This morning, when I said "good morning" to Mr. Fish, I got worried becasue Mr. Fish looks "sick". My neighbor is somewhat of a fish expert. He loves fish and has a living room-sized aquarium. I called him over to check out my fish and his diagnosis is "it's some kind of a virus and it has spread all over him. He's dying".

I don't know how much longer Mr. Fish will live, if he does. Rosh Chodesh Cheshvan Alef is this Monday - who knows???