Chasdei shamayim I found 2 beautiful segulot which I can personally testify I saw amazing salvation and wanted to share with you, as follows:

Rabbi Menachem Mendel Merimanovben Yosef, zs'kl, promises:
"Whomever will light a candle in my honor every Tuesday, I will personally operate for his salvation" 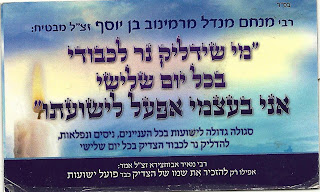 It is a great talisman for salvation in all areas, miracles and wonders, to light a candle in honor of the Tzaddik every Tuesday. Rabbi Meir Abuhatzera, zs'kl, said: "Just to mention the name of the Tzaddik already operates salvation."

Once the Satan fixed his sight on this Tzaddik and said to himself: "Is it possible that this man does not sin? " Then the Satan went and asked G-d: "How do you consider Rabbi Masya Ben Charash?" And G-d replied: "He is a perfect Tzaddik" The Satan said to G-d: "Give me permission to put him to the test". G-d told the Satan: "Go".

The Satan appeared to the Rabbi as a beautiful woman the like of which there had never been in the world. When the Tzaddik saw he immediately turned his face away from the woman. Then the woman quickly moved to the side where Rabbi Matya had turned his face to, and he quickly again turned his face away from that woman. Then the Tzaddik said: "I am afraid that my Yetzer hara (evil inclination) will overpower me and will cause me to sin". What did the Tzaddik do? He called a student that was there with him and ordered him to bring him fire with nails. The student brought him nails and the Tzaddik put them to his eyes and became blind. When the Satan saw this he trembled and fell on his back.

At that time The Holy One Blessed be He called the angel Raphael (for he is in charge of healing) and told him: "Go and heal Rabbi Matya Ben Charash". Then Raphael came in front of the Rabbi and he asked: "Who are you?" and he replied: "I am Raphael the angel, I came for G-d sent me to cure your eyes". And Rabbi Matya replied: "Leave me alone, what is already done is what will be". Raphael returned before the Holy One Blessed be He and said: "Master of the World, thus spoke Matya". G-d said to him: "Go back to him and tell him that I will personally guarantee that the Yetzer Hara will have no power over him". Immediately Raphael went and cured Matya. From here Our Sages said: "All those that are careful not to look at women, the Yetzer hara has no power over them".

Light 18 candles in honor of Rabbi Matya Ben Charash and say Tehillim chapter 86 eighteen (18) times and ask for whatever you need - guaranteed, b'h, you will see miracles!!!!