Approximately two weeks ago, a man entered the office of the Rav Mekubal Rabbi David Abuchazera Shlita of Naharia and was taken aback to see the Rav standing during the entire visit.

The man couldn't restrain himself and asked, "Will the honorable Rav tell me why he is not sitting?" 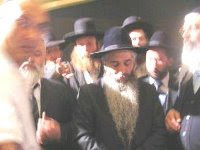 The Rav's answer was astonishing and remarkable: "I dreamed that my grandfather, Rabbi Yisrael Abuchazera, the Baba Sali, zs'kl, is angry at me - 'Moshiach came twice to see you and you did not rise for him and show him his due respect. He will come a third time and you must honor him!' I don't know who the Moshiach is that my grandfather is referring to, so I began standing for all the people that come see me," said the Rav.

The man was stunned and when he exited the Rav's room, he innocently told the people in the waiting room what the Rav said.

The Rav's students also said that in recent shiurim the Rav gave, he said astounding things. The Rav opened the ancient Sefer Chesed Le'Avraham and showed them that the author, Kadosh Tzaddik Rav Avraham Azulai, zs'kl, wrote that the Moshiach will arrive in the year תש"ס - 5760. The Rav explained, "The meaning of תש"ס is שנת סוף end year," said the Rav, "but it's preferable that the end will be סוף טוב good end, and therefore, it is necessary to clarify that he meant this year תשס"ט - תהא שנת סוף טוב - 5769 Will Be Year of Good End."

In another shiur, the Rav said an even more astounding fact. He again opened an ancient Sefer, "Bina Le'Itim" and read from it. "In total, there are three times since the creation of the world that Birkat HaChama (blessing of the sun) is said on a Wednesday, 14 Nissan, the day the natural light source were created. The first time was when the Jews were redeemed from Egypt. The second time was in the time of Mordechai HaYehudi and Esther HaMalka, a'h, when HaShem redeemed Am Israel. And the third and final time will be this year Wednesday 14 Nissan, 5769, and this is the time that Am Israel will have the complete and final redemption," said the Rav.

Additional Gedolei Israel are also joining in, such as the Mekubal Rav Yoram Abergel Shlita whom hinted in his last shiur that the war of Gog UMagog is very near, "I prefer not to talk about what will occur during the months of Tishrei and Cheshvan...” The Gaon Rabbi Eliezer Berland Shlita also said to his Chassidim prior to Rosh Hashanah, "This will be the last time you will be traveling to Uman." Also the revered Rav Shachne Zohn Shlita dreamt that his Rebbe, the Chofetz Chaim, zs'kl, told him that the Geulah is very near and we should prepare.

Why do you mention that old adulterer, Berland?!