Hundreds of women come daily to consult with Rebbetzin Batsheva Kanievsky (tichye); some literally even camp out for days waiting to see the Rebbetzin.

For the first time, G'dol HaDor Harav Chaim Kanievsky Shlita allowed cameras inside his home and permitted his Tzaddeket wife to be intereviewed. 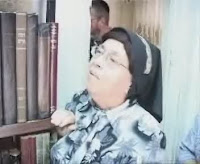 Question: How do you evaluate the situation today?
Rebbetzin Batsheva Kanievsky: We must do Teshuva. HaShem have mercy on us. HKB'H wants to send Moshiach but cannot do it yet. People are desecrating the Shabbat; we see many troubles for Am Israel.

Question: In your house, do you speak about the Geula?
Rebbetzin Batsheva Kanievsky: We don't only talk about the Geula, we make effort to bring the Geula by praying and learning Torah day and night.

Question: Are we the generation that the Geula will arive?
Rebbetzin Batsheva Kanievsky: Of course, without a doubt, it's very clear. May we be zoche that HaShem will send Moshiach immediately, Amen.

Rebbetzin Batsheva Kanievsky: Not long ago a young boy died and his mother was heartbroken. Not long afterwards, his mother dreamed that a woman who was killed in a bus accident appeared to her and told her that her son is in the highest best spiritual place in Shamayim. The mother asked for proof and said that she misses her son so much. The woman replied that this is the time of Moshiach's arrival and the sign is that Am Israel are going thru many troubles but very very soon, very near, Moshiach will arrive. Each person must make an effort (Teshuva).