"Thou shalt not kill," cried the pashkevils (large posters hung in public spaces) to the ultra-Orthodox community in Jerusalem on Wednesday. The rallying cry asked the haredi public to prepare for a battle that "will shake the very foundations of this country," against the newly approved law regarding brain and respiratory death. The writers accused the new bill of "permitting murder in the case of brain death." Which, they said, was "murder in every sense of the word."

Community rabbis cautioned the public to be aware of the new law and demand Torah commands be fulfilled in their entirety. "Doctors should also beware not to betray the word of God, and not to assist in murder," read the posters, adding blessings of wellness to the people of Israel suffering from illness.

On Wednesday morning two pashkevils ran the views of two of the most prominent rabbis belonging to the Lithuanian non-Hasidic ultra-Orthodox Jewish community. The first was a renewed publishing of a poster from 1991, the year in which Rabbi Yosef Shalom Elyashiv and Rabbi Shlomo Zalman Auerbach determined that the pronouncing one dead on the basis of brain death was tantamount to murder.

The second poster was published solely in Elyashiv's name, and said: "As I have already stated, as long as the heart (of the prospective organ donor) is still pumping blood, even in the case of 'brain death,' it is not permitted to remove any organ from the patient.'

A related article published in the community's paper read: "In the world of the Torah and the Halacha, much concern has been expressed regarding the provocative and shameless intervention in the grave subject of murder and (the Jewish law of) saving a life."

Meanwhile, on the same day that this bill passed in the 'Knesset', at the other side of the globe in Oklahoma City, OK...
Four months after he was declared brain dead and doctors were about to remove his organs for transplant, Zach Dunlap says he feels "pretty good."

Dunlap was pronounced dead in Wichita Falls, Texas, after he was injured in an all-terrain vehicle accident. His family approved having his organs harvested. His father, Doug, said he saw the results of the brain scan. "There was no activity at all, no blood flow at all."

But as family members were paying their last respects, suddenly he moved his foot and hand and reacted to a pocketknife scraped across his foot and to pressure applied under a fingernail.

After 48 days in the hospital, he returned home. Dunlap, 21, of Frederick, said he has no recollection of the crash. But one thing he does remember is hearing the doctors pronounce him 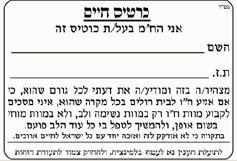 dead. "I'm glad I couldn't get up and do what I wanted to do," Asked if he would have wanted to get up and shake them and say he's alive, Dunlap responded: "Probably would have been a broken window that went out."

LET US LIVE:
If any of your loved family member needs to go to a hospital, c'v, please make sure that the patient signs that he's not willing to be cannibalized for any organs in case of brain-dead and demands continued medical attention as long as the heart continues pumping.