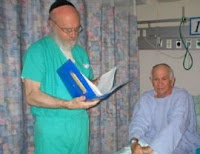 Yesterday was a very exciting and emotional day at the Sanz-Laniado Hospital. Dr. Yaakov Yolno performed circumcision on the oldest person in Israel, 70-year old Mr. Vladamir Prinse. After entering the convent of Avraham Avinu, zs'l, Vladamir requested that his name be changed to Yishai.

The grandson of the newly-circumcised Yishai delivered a very emotional speech and said that his grandfather always had total devotion to Yiddishkeit despite being born in a communist country where circumcisions were prohibited.
http://www.newnew.co.il/Front/NewsNet/reports.asp?reportId=222337

The Laniado Hospital was started and built, by the previous Sanz Klausenberg Rebbe zs'kl. Admor Yekutiel Halberstam of Klausenberg, the grand Rebbe of Sanz-Klausenberg’s first wife and 11 children were murdered, a'h, HI'D, during the Holocaust. During those years he made a commitment that if he survived he would dedicate his life to saving life. Eventually he built the Laniado Hospital in Netanya, Israel,

After the war he remarried, moved to the US, had seven children, then came to Netanya, founded a hassidic enclave here and built Laniado-Sanz hospital. The Hospital is a community health care facility not funded by the Israeli government.