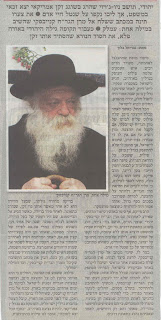 An Orthodox Jew from New Jersey was involved in a car accident and accidently killed an old non-Jewish man. Although the courts found the Jewish man not guilty, he could not carry the the pains of the guilt that he killed an old man. It gave him no peace and it caused him to lose his appetite and was unable to sleep for weeks.

He decided to seek counsel from the revered sage, Rabbi Chaim Kanievsky Shlita of Bnei Brak, and wrote him a letter asking the Rav what tikun can he do because he accidently killed a non-Jew.

The Rav wrote him an answer that included one word, "Amalek".

The Jew did not understand this answer and continued suffering with sleepless nights. At some point he decided to move away from his town to begin a new life. He began searching for a new house and found a house that appealed to him. The owners of the apartment told him that they are eager to get rid of this house because they inherited from their dead father that was killed in a car accident.

After short investigation, turns out the apartment belonged to the non-Jew who was accidentaly killed by the Jew. In the basement of the house, the Orthodox Jew found materials belonging to the old non-Jew man. He was shocked to find a picture of the old man during his youth proudly wearing an SS uniform, standing next to Hitler, yimach shemo.

It turned out that this old man was an SS officer in the Nazi army and after the war, he came to the United States and hid his past. The SS Nazi Officer also hid other documents, including all the names of the Jews he personally murdered.

When he read the names of the Jewish people that were murdered, he found both of his parent's name on this list.

It was then that he understood Rabbi Chaim Kanievsky Shlita's answer that contained one word, "AMALEK".