Last year around this time, Chanukah 5767, I had an urge to pray by Kever Devorah HaNevia, a'h. Not knowing where she is buried, but with tremendous Divine Providence, HKB'H led me into Moshav Naftali in the upper Galil, as it says that a person's feet lead to the place HaShem wants....

As I was walking in the Moshav searching for Kever Devorah HaNevia, I heard very loud barks from behind a house. I decided to walk in the direction towards the barking (I don't even like dogs!!!) and I see a dog barking infront of a supermarket.

In the picture is Ami and his dog, Jim 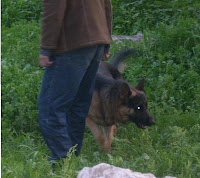 Inside the supermarket, I met Ami, a young secular/traditional Israeli guy that lived in the Moshav all his life. After explaining to him the reason I'm in the Moshav, he offered to help me search for Kever Devorah HaNevia. Later he told me that he was very surprised that his dog, Jim, was barking because usually he is a very quiet dog...

Even though Ami didn't believe me that Devorah NaNevia is buried within 1,000 miles radius, he told me that he felt an unexplanatory urge to help me.

In the darkest time of the year, the night before Chanukah, we merited to find Kever Devorah HaNevia.

Not long ago, my husband was told in a dream by a Malach to give Ami a message. The Malach explained that Ami's name is written in Tehillim chapter 23, עַל-מֵי מְנֻחוֹת יְנַהֲלֵנִי. When switching the letters of עַל-מֵי, it reads לעמי - To Ami. The message was "Tell Ami that the מְנֻחוֹת, resting place, is the resting place of Devorah HaNevia and he needs to do a mission in the secret of the word יְנַהֲלֵנִי."

This morning, Reb Yaakov suggested that I call Ami and tell him the good news that we received the permits to build the Tzion for Kever Devorah HaNevia. I haven't spoken with him since my husband's dream. On the fifth ring, Ami answered the phone and told me the most wonderful exciting news:

A couple of weeks ago he realized that having a dog is not proper and gave the dog away, b'h.

Last week he made a final decision that he wants to learn Torah full time and quit his job. He enrolled in the Kollel in Miron and now lives in the dormitory rooms above Rabbi Shimon Bar Yochai, zs'kl, kever. He is now a 'full-time learner' and devotes all of his time to Torah study...