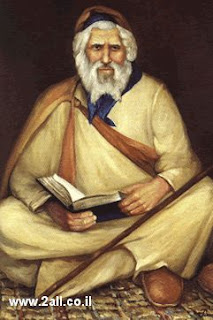 Rabbi Yaakov Abuchatzeira, zs'l, was famous before he was even born. His father Rabbi Massud, zs'l, had dreamt that his son would shine over the world with his sainthood.

At the age of 13, young Yakov, already initiated to the Torah and Talmud by his father, invested himself in the study of the Kaballa. Numerous prodigious accounts exist about this 19th century figure, in a world when the surnatural and normal existed side by side.

He had the habit of waking up at midnight to do Tikun Chatzot, dedicating the rest of the night to study and meditation. One night, one of his servants heard a strange voice coming from his master's room when he was supposed to be alone. When he came closer to investigate,a bright shining light blinded him. He didn't recover his sight until he promised his master that he wouldn't disclose the secret of the divine visit that he had received. It is said that Eliyahu Hanavi (Elijah the prophet) appeared to him.

Another time, the Abir Yaakov was the guest of a rich person. During the meal,a lamb that had escaped from its pen approached the great Rav. He observed and said: "Go back to your pen, I will do what you have asked". He then explained to his hosts: "You see,this lamb is the incarnation of the blessed soul of a talmid chacham, his soul's tikun demands a special sacrifice with strong kavanot and the consumption of its flesh in the ritual meal of a Mitsva.

A few days later,when the master of the house stood with his guest at the time of his departure, he heard a mysterious voice that whispered to the Abir Yaakov, "You have saved my soul. God will grant you glory and life".

In the winter of 1879, Rabbi Yaakov set out for Eretz Yisrael. However, upon arriving in a town near Alexandria, Egypt, he told those with him that it had been revealed to him in a dream that he would pass away after the next Shabbat. He also told them that he accepted Heaven's decree. He passed away on Sunday. Rabbi Yaakov left behind four righteous sons. R' Abuchatzeira's many distinguished descendants included his grandson Rabbi Yisrael Abuchatzeira, known as "Baba Sali".
It was attempted 6 times to move his Kever from Dimanhur, Egypt to Eretz Israel and each time, it would rain and turn into a storm, making the transfer impossible. It never rains in Egypt for they receive the water from the Nile.
Once, two wealthy merchants once came before the sacred giant, Rabbi Abir Yaakov Abuhassera zs"l, to receive his blessing for success.

He said, "I will give you a fool-proof 'segulah' for great success and prosperity in both this world and in the World to Come: spending time in the Bet Midrash morning and evening. The mishnah states that such a person reaps the fruits of this misvah in this world while the principle remains in its place, ready for him in the World to Come."

They answered, "Of course! We attend services in the synagogue morning and evening!"

Responded the rabbi, "I didn't say, 'spending time in the synagogue.' I spoke of the Bet Midrash, a place of Torah study. Set aside some time for Torah study together with your prayers, a chapter of mishnayot or a portion in the Humash, and you will find success."

They said, "But we are businessmen. The Bet Midrash is the place for Torah scholars, talmidei hachamim!"

"However, this is not enough. The pasuk states, 'Zevulun dwells by the shore of the seas.' This alludes to the fact that Zevulun, too, must spend time within the walls of the Bet Midrash and dwell at the shores of the vast sea of Torah. Only then will he merit the next phrase of the pasuk, 'his boundaries will extend until Sidon.' 'Sidon' has the same numerical value as, 'Elokim Hayim' [Living G-d], meaning, that he is guaranteed that Hashem will be at his side. If you promise me that you will study some Torah in the morning and some in the evening, and you will spend time along the shores of the seas - the sea of the Written Torah and the sea of the Oral Torah - then I guarantee you that the Living G-d will be at your side, and success will accompany you on all your endeavors!"

“Whoever blemishes the holy Brit is considered to have been false to the seal of the King of Kings, the Holy One Blessed Be He. This is the meaning of ‘We have not been false to your Brit.’

“Therefore, a person who comes to serve G-d should first rectify any blemish to the Brit in the proper fashion, and afterward begin to serve G-d.

“For the matter of transgressing the Brit, and all of the sufferings that stem from this, is referred in this rebuke (in Bechukotai). So that when the verse says: “But if you will not hearken to me, and will not do all of these commandments, and if you shall despise My statutes, or if your soul abhor My judgments, so that you will not do all of the commandments, but that you break My Brit...,” it does not mean to say that they do not do any of the precepts, or that they do not occupy themselves with Torah; but rather, they do occupy themselves with Torah, and they do perform the commandments, but the main thing is missing, for the Brit, which is the principle matter, is blemished and has not be rectified. Since the Brit is blemished and has not been rectified, everything is canceled and considered naught.

“This is why the verse concludes: ‘but that you break My Brit.’ That is to say: ‘Everything that I said about your despising My statutes, and your abhorring My judgments, and your rejecting My commandments, is not to be taken literally. Rather you broke My Brit and you blemished it, and you did not rectify it. For this reason, even if you hearken to My voice in performing all of the other commandments of the Torah, behold I proclaim to you that you have not hearkened to Me. Even if you will do all of the mitzvot, I will consider that you have not done them. Even if you will observe My statutes with love, I proclaim that you have despised My statutes. And even if you will perform My judgments with great joy, I proclaim that you have abhorred them. All of this is because ‘you break My Brit. For you violated My Brit and have not rectified it. For this reason, everything you do is considered canceled and as naught. And all of the Torah and mitzvot that you do, it all goes to the Sitra Achra. And because you betrayed My Brit, I will bring upon all the sufferings in the world....’

“Therefore, whoever desires to do t’shuva (repentence), let him first rectify blemishes to the Brit, and after that the things he does to please G-d will succeed.”

Rabbi Yaacov Abuchatzera’s commentary on the Torah portion Behukotai explains that it is Israel’s betrayal of the Brit that brings horrible tragedies and exile upon them. Nonetheless, it is also the merit of the Brit that saves them after the long generations of suffering in exile, as G-d goes on to promise:

“Then will I remember My Brit with Yaacov, and also My Brit with Yitzhak, and also My Brit with Avraham will I remember; and I will remember the land... And yet for all that, when they are in the land of their enemies, I will not cast them away, nor will I abhor them to destroy them utterly, and to break my Brit with them; for I am the L-rd their G-d. But I will for their sakes remember the Brit of their ancestors whom I brought out of the land of Egypt in the sight of the nations, that I might be their G-d; I am the L-rd” (Vayikra, Behukotai, 26:42-45.)