War Against the Sitra Achra

FC with Binyamin Golden:
Question: Why didn't we win the war?
Answer: It is becuz this is the direction of a very difficult process and we need continue with all power and force! Do not rest, any minute of resting might mean losing. Alas, what we are asking is only to save Jews, that's it, just to save Jews from the Sitra Achra (SATAN). The time is short and the work is tremendous. There is no time.

FC with Galia:
It must be understood that the strength of the Sitra Achra know that this is the end for them, like a wild animal that is wounded, they are they are trying to overcome with their last strength and bring down more people to be as them: wicked, impertinence (chutzpa), violence, wars, and abuse. The more Mitzvot we will do, the less we will be harmed.

FC with M.:
Why are you so bitterly crying?
M.: I see things that frighten me... I see the Sitra Achra getting wilder because we are so close to the "end of the road" and the Sitra Achra does not want us to succeed. I am very afraid and worried that this is the final war against the Yetzer Hara. The Sitra Achra will not surrender easily. This is going to be the war for eternal life for every Jew.

FC with anonymous:
I am informing you now, it's not going to be easy. The enemy is prior to deat 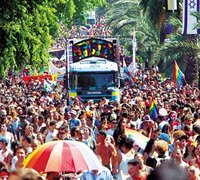 h and knows that his days are numbered and wants to take down with him as many as possible. To die alone is not satisfactory for the Sitra Achra. He'll take down as many as he can and its going to be a merciless and cruel war. Don't be fooled and do not be afraid and don't stop.
Am Israel will live but how long and how many will survive and those who will survive, in what condition? It's not going to be easy. HaShem will kill the Sitra Achra together with the Jewish hearts and homes that permitted him entrance, unless his is removed beforehand. You must continue to fight.

Last nite, the first time ever, my husband sat/slept in the living room while I was advocating for Am Israel in Shamayim. I was banging the walls, the bed, the floor and yelling for mercy. For over 3 hours, from 1:45 am till 5:00 am straight I was begging in Shamayim not to harm Am Israel - it's a hard and very difficult defense. In shamayim, the prosecuters are getting the upper hand. It's going to be, HaShem protect us all, a bloodbath if not cancelled!!!

In a previous dream I was told that if, c'v, this parade will occur in HaShem's Holy Yerushalayim, heads will be decapitated (ראשים יערפו). The streets of the holy city Yerushalayim will be flowing with blood, r'l. And not only in Yerushalayim.


Galia (autistic) said Iyar, 2002 http://www.gadworks.com/SignsFromHeaven/files/Messages_New.html
There is one decree that keeps getting postponed. It is successfully postponed in the merit of the Tzaddikim that are amongst us and the Tefillot from all previous generations. They are begging and crying for Am Israel in Shamayim and are advocating for us. But if it shall happen, only the deserving will survive. It will be tremendous pain right before Gog uMagog and the final redemption.

In the dream, AM ISRAEL'S LAST OPPORTUNITY Moshiach said that this postponment will be the end of all Tikkunim to purify Am Israel. Moshiach said that HaShem is angry at Am Israel and the parade of "shame" has angered HaShem even more. I told him that most Jews, including Goyim, don't want this parade and are fighting so hard against the Sitra Achra. Moshiach said that Admat Kodesh (Holy Land) is also crying.


ובחוצות ירושלים
The people commit their sins in public, without any sense of shame.

(Radak)Some Jews that put on Tfillin daily and "look and dress" religious but are trapped deep by the Sitra Achra. Some believe that the presence of the Shechinah in the city of Jerusalem will ensure that it will be saved through a miracle. BUT the filthy disgusting dirty parade of shame that Jews scheduled has angered HaShem more so.

"Jewish government that support, silently or otherwise, this parade and the departure of holiness from Israel, and their courts and law-enforcers - they are all guilty and responsible for the grave results that are foreseen as a result of this parade and that could happen during the parade, Heaven forbid. As everyone already knows, that Shabbat is Parshat Vayera (destruction of Sodom and Gomorra), the loyal Jewish public is threatened by a march of the abominators in Jerusalem - a giant parade with the permission of the police and the Supreme Court... For such sins, the Torah warns clearly that the Land will vomit out its inhabitants... Will you [sit] closed up in your home and wait for destruction, Heaven forbid?"

WE MUST CANCEL THIS PARADE - OUR LIVES DEPEND ON IT!!!

For those who cannot physically fight for HaShem's honor in Yerushalayim, we could fight with our mind and body spiritually. "כל ישראל ערבים זה לזה"

Email sarahyy@earthlink.net or nava998@yahoo.com and encourage others to be part of the Massive "Parade of Purity".

WHAT CAN I DO?, Preserve Jerusalem's Sanctity , Parade of Trucks, Wipe Out the Impurities
http://mysticalpaths.blogspot.com/2006/10/immoral-parade-jerusalem.html