Thousands of Orthodox protested at Jerusalem’s Sabbath Square Wednesday against the holding of the 2006 Gay Pride Parade in the city, with most of them linking the parade to the recent war in Lebanon. “The war in the north broke out as soon as the parade was announced”.
The parade was canceled due to the war, but gay rights groups acted to set another date for the parade since the fighting has ceased. ‘War in Lebanon broke out as soon as the parade was announced,’ haredi man says. “Rabbis are fearful of another war,” the haredi said, adding that a special request has been forwarded to Diaspora Jews “so they too would protest and act for the preservation of Jerusalem’s sanctity.” Rabbi Moshe Sternbuch, the head of the Eda Haredit rabbinic court, said during the rally, “We did not succeed in Lebanon due to the obscenity and promiscuity in the Holy Land.” 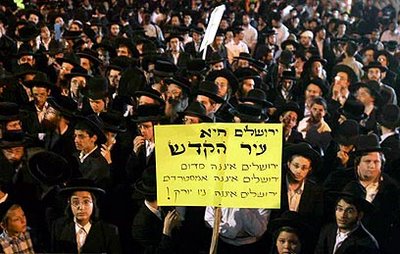 The rabbi quoted Rabbi Wasserman, who said during the Holocaust that “Zionism has destroyed the Land of Israel’s sanctity; this is how the troubles of the Shoah began, and this is why we must act to wend the promiscuity.

“There is no greater disturbance than the disgraceful parade,” Rabbi Sternbuch said.

Despite the fact that Jerusalem Mayor Uri Lupolianski called out against holding the parade in the city, many in the haredi community hold him directly responsible. “The municipality did not protest against the holding of the terrible abomination parade,” Rabbi Sternbuch said. 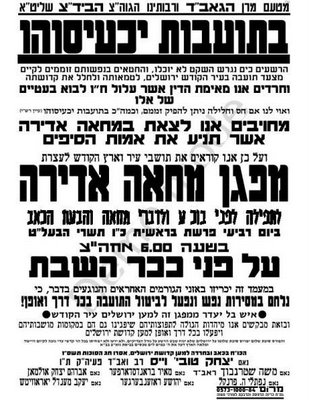 The haredim also presented other “divine signs” against the Jerusalem gay parade: The parsha for the Sabbath following the parade is Vayera from the book of Genesis, which tells of the total destruction of Sodom by G-d.

The parade falls on the day after the 16th anniversary of the murder of Rabbi Meir Kahane, and his followers, who are expected visit his grave on the Mount of Olives on the day the parade is scheduled to take place, said they would ‘take advantage of the memorial ceremony for Kahane to fight the gay parade.’
More large protests are planned to demonstrate the planned “pride parade” which will (NOT, b'h) be taking place after 66 years of "Kristallnacht." Leading Rabbonim are expected to attend all rallies. Chacham Ovadia Yosef Shlita has called residents to attend “against the sodomizing Amalek filth parade, who seek to defile the holy city... Many more Parade of Protests are in the works...
Flights to Israel:
http://www.lastminute.com/site/find/World/Middle-East/Israel/Israel--Flight.html
http://www.cheapflights.com/flights/Tel-Aviv/
http://edit.travel.yahoo.com/p-resv-flights-tlv-tel_aviv_israel