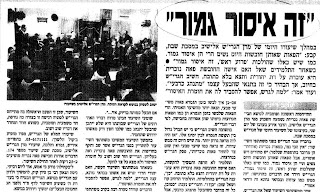 Maran HaRav Yosef Sholom Elyashiv Shlita had some very harsh words regarding today’s sheitels, stating the women who wear them today are as if they go outdoor bareheaded.

The statements were made last week during the Rav’s daily Gemara Shabbos shiur the weekly Belze-affiliated BaKehilla reported.

The Rav is quoted as saying there are permitted sheitels and those that are asur, but today’s are strictly forbidden. He called “today’s” sheitels “erva”, stating they are absolutely forbidden.

A participant in the shiur asked Rav Elyashiv how they wore human hair wigs in the time of the Gemara, to which he responded the wigs of those days were different, with the best at that time being comparable perhaps to today’s worst, adding today’s human hair wigs represent “erva” and are absolutely forbidden.

The Rav repeated over and over again the severity of the isur of wearing such sheitels, which the wife and her husband share equal responsibility.