Citizens residing in north and central Israel report seeing a large bright ball and flaming tail object travel horizontally from east to west Tuesday night at great speed at a relatively low altitude; some say it made shrieking sound 'like a missile'.

Yigal Pat-El, chairman of the Israeli Astronomical Association and the director of the observatory in Giv'atayim said, "The reason we were able to observe this meteor is because it was relatively large. Most meteors don't weigh more than 1/1000 gram, and this one apparently weighed a few grams." Officials said the atmosphere of near hysteria was only made worse by the fact that astronomers had failed to predict this particular meteor would hit earth. One astronomer said he and his colleagues rarely miss predicting such a large meteor colliding with earth's atmosphere. 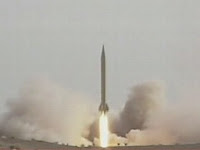 I don't know about you, but I don't think this reporting was a meteor. Israel's officials and media downplayed the unidentified flying object in order to stop the hysteria.

With the Iranian missile tests, I'm wondering if it was in fact a missile that went over Israel. Iran test fired a new missile that can deliver a 1-ton warhead on Israel or U.S. bases in the region, hitting a nerve in the tense Middle East as well as in nervous oil markets. It also test-fired nine missiles today and warned the United States and Israel it was ready to retaliate if they attacked the Islamic Republic over its disputed nuclear projects.

Israel and Iran have been engaged in an escalating war of words, with Iranian President Mahmoud Ahmadinejad saying Israel should be wiped off the map. "The Zionist regime is pressuring White House officials to attack Iran. If they commit such a stupidity, Tel Aviv and U.S. shipping in the Persian Gulf will be Iran's first targets and they will be burned." In response, Israel is warning that it may have to carry out an airstrike to prevent Iran from developing a nuclear arsenal.

Talmudic sages said "במסכת סנהדרין צ"ח "ייתי (משיח) ולא אחמיניה "will come, do not want to be seen". The absolute Tzaddikim of previous generations were afraid of the birthpangs of Moshiach and did not wish to live in the period before Moshiach's arrival, because of the tremendous trouble and attacks.

It says that if Israel will not do commandments from will, HKB'H will place a king that his decrees will be as harsh as Haman and this will force them to do Teshuva. Just as it was in the time of Achashverosh, when Haman said "Destroy, kill... all the Jews..from child to... in one day".

Three letters in 'אחמיניה' are HAMAN. The first 3 letters of 'אחמיניה' are ACHAM, same as the first letters of אחמדניג'אד Ahmadinejad... He is HAMAN of our generation, threatening to "Destruct the Jews..."

Prophet Yechezkel (zs'kl) in chapter 38 describes the result of nuclear atom bomb:
"Surely in that day there shall be a great shaking in the land of Israel; the fish of the sea, the birds of heaven, the beasts of the field, the crawlers on the earth, and all the men who are on the face of the earth, will be shaking before Me, the mountains will be overturned, the high places will come down, and every wall will come falling down to the earth".
יחזקאל ל''ח: ביום ההוא יהיה רעש גדול על אדמת ישראל ואפילו דגי הים ירעשו ועוף השמים וחית השדה וכל הרומש על פני האדמה. יפלו הרים, יהרסו מדרגות וכל חומה לארץ תפול.