בטל בשישים - Cancelled at Sixty
Why will the 'state' of Israel be cancelled at 60 and no longer exist till even 61? In order to understand this, we must understand the root of the 'state'. Questions such as 'who built it?' and 'why'?

The Erev Rav were converts who joined the Jewish people when they were leaving Egypt. Our sages teach us that they were not sincere and continually cause the Jews to rebel against G-d. They were responsible for the most grievous sin the Jews were ever involved with, the sin of the Golden Calf. They were also the driving force behind every major movement within Judaism to undermine our commitment to G-d and His Torah. They are power-hungry, selfish opportunists who seek power and glory at all costs, and will stop at nothing to attain their goals.

וירא העם כי בשש משה לרדת מן ההר ויקהל העם על אהרון... When the nation saw that Moshe delayed to come down from the mountain, the people assembled about Aaron and said to him... 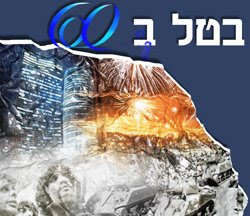 The Zohar referrs to the העם (nation) being the Erev Rav. בשש: The Torah uses the word בשש "boshesh; delayed" which can also be read, "beshesh; at the sixth."

When the Erev Rav saw that Moshe Rabenu, zs'l, delayed coming down from the mountain in the sixth hour, the Erev Rav gathered around Aharon and said to him: “Arise, make us gods that shall go before us."

It says in the Zohar HaKadosh that the Erev Rav will rule Am Israel in the last galut and will cause Am Israel great pain; the same way they tricked and persuaded Aharon HaCohen (zs'l) and Am Israel to build the golden calf and caused them tremendous pain.

Zohar (Book 1, 25a): “During the fourth and final exile the Erev Rav will be powerful leaders. They will bring the weapons of ‘Hamas’ over the Jews. Regarding this development scripture states: ‘The Land is full of Hamas because of them (Genesis 6:11)’. They (i.e., these members of the Erev Rav who are currently the leaders of Israel) are Amalekites.”

Zohar HaKadosh: "The Erev Rav will turn the young children of Talmudei Torah into seculars, the schools will be 'modern' and will deny religious principles. They will claim that the Torah did not come from Shamayim, c'v, and that learned men wrote it for money. They will make fun of the religion and many will throw away the religion and the Mitzvot to be socially accepted, r'l."

For 60 years the Erev Rav took control over Israel and tricked and convinced Am Israel to join them in building the antisemitic Zionistic State in the holy land.

If one looks closely at current events such as:
* Chile Volcano Eruption;
* Fighting in crisis-torn Lebanon;
* Massive sink hole in Texas swollowed up oil field equipment and cars;
* Tornadoes in Oklahoma and Mississippi;
* Cyclone Nargis kills over 100,000 people;
* Earthquake in China measuring 7.8 on the richter scale, over 20,000 people dead;
* Fast-moving wildfires in Florida's Atlantic ocean;
* Federal agents arrested over 700 people at the Rubashkin meanpacking plant;
* More than 70 people were killed in bomb blasts in western India;
* Mid-Atlantic storm floods roads, knocks out power, chases people from their homes;
* The Etna volcano in Sicily rumbled back to life with a burst of ash; (The last time it erupted this severe was November 23rd-24th... a couple of days before the Annapolis Conference)
* Prime Minister SMolmert under heavy investigation for alleged bribery.

All these great disasterous tragedies began Thursday, May 08, 2008, Israel's Independence Day and all within 6 days. This is NOT a coincidence - it is Divine Providence.

Chazon Ish, zs'l: "Moshiach will not take over from them (zionists), something will happen in the interim. One clear day they will open the windows and they will see 'no more State'."