Blink of an Eye From USA to Eretz Israel

Son of Concorde: Flying at more than twice the speed of Concorde and five times the speed of sound, this hypersonic airliner is set to be the future of modern air travel. 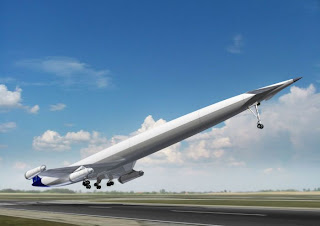 Looking like a supersonic passenger plane from Gerry Anderson's Thunderbirds, the revolutionary aircraft with a top speed of 3,400mph aims to fly between London (or Brussels) and Sydney in under five hours.

Billed as the "Son of Concorde", the commercial plane is designed to carry 300 passengers and will reach speeds of Mach 5 – five times the speed of sound.

The £5.4million scheme aims to study the types of propulsion systems required "to reduce long-distance flights, such as from Brussels to Sydney, to less than two to four hours".

The current flight time for airliners flying between England and Australia is 22 hours 50 minutes - four times longer than the target set.

To reach Mach 3 the plane initially generates thrust through engines similar to those used in conventional jet aircraft. But beyond Mach 3, a specialist unit pre-cools the super-heated air generated by flying at high speeds before it enters the turbines, preventing the engines from melting.
http://www.dailymail.co.uk/pages/live/articles/news/news.html?in_article_id=512375&in_page_id=1770