Neither Alive or Dead

In a recent shiur given by HaRav Amnon Yitzchak Shlita in Carmiel, a police lieutenant (with a kipa on his head) asks the Rav, “Former Prime Minister Ariel Sharon is in an indistinct 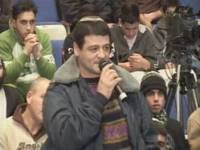 condition. He is neither dead nor alive. Is there anything, maybe a Tikkun (rectification), which can be performed on his behalf in order to help him? On one side, he has merits but on the other side, and everyone knows what I’m talking about, he executed enormous destructions. Am Israel are responsible for one another. How are supposed to treat this situation?”

Rav Amnon: “Ariel Sharon is a dilemma. He is not wanted in the lower world and unwanted in the upper worlds. Some people claim that the only reason that Sharon is in a condition of dead/alive is because someone obviously is profiting from it. If it were any other person, the family would have been asked to disconnect him from the breathing machine a long time ago. But we see that in Sharon’s situation, no one is demanding this.”

“It is quite obvious there is no medicinal magic to help Sharon and fairly evident that in his circumstance, he’ll never walk out alive. This situation is even more complex because I don’t see anyone concerned about him or praying on his behalf. Even his own children didn’t organize any public prayers on his behalf. No one even offered to perform Pidyon Nefesh for him. It can be easily understood there is no probable way he will come out alive from this.”

“If people will pray and learn Torah on his behalf, perhaps it will benefit him and its merits will allow him to wake up from this, or die. In his condition, to either wake up or die is a much better alternative than to be in the live/dead form he is in. But no one is concerned about him. Occasionally, someone asks or talks about him but that’s it.”

“His situation is the biggest Divine punishment; shame, degradation, and indignity and even worse, no one cares. He might have had some merits, but I do not know what his intentions were. He fought wars in Israel and did good, but where are his merits? We know that he did horrible things that lacked pure intentions. Where are his friends that loved and screamed, “Arik, king of Israel”, why are these people not helping him?”

“In every shiur someone from the audience asks me to bless an ill family member or a friend and in exchange, agrees to take upon himself some kind of a Mitzvah for the benefit of the ailing individual. The ill person is anonymous to us; he is neither famous nor well known, and definitely not a public leader. But with Sharon – everyone is SILENT! Where is the government? Where is his cabinet? Where are his friends? Where is his family? Where did all of them disappear?”

Police Lieutenant: “HKB’H gave you a major key to be able to restore people’s health. I saw you bless people in many shiurim videos that are offered on Shofar.net and people are miracleously cured after being blessed by you. Please bless Ariel Sharon and G.od wiling, your blessing will help Sharon”.

The public shows mercy and claps their hands in agreement.

Police Lieutenant: “I am asking that you bless Ariel Sharon and Go.d willing, he too will heal”.

Harav Amnon Itzchak Shlita: “I ask from HKB’H to quickly do what is right in His eyes for Ariel Sharon so that he no longer continues to be in the condition he is currently in”.

The lieutenant is satisfied with this blessing and answers Amen. However, the audience does not join him answering Amen.

In the women’s section, a lady requests that Jonathan Pollard should also get a blessing to be released from prison.

Rav Amnon Yitzchak Shlita: “I ask from HKB’H to quickly do what is right in His eyes for Jonathan Pollard”.
This time the entire audience replies loudly, Amen.