Kever Rachel - the Tomb of Rachel - is a place of longing and prayer for Klal Israel. The Torah records that when Rachel Imenu, a'h, was buried: "...Yaakov (Avinu, zs'l) set up a pillar upon her grave; the same is the pillar of Rachel's grave unto this day." (Gen. 35:20)

The Targum Yonatan explains the phrase "unto this day" means until the time of the coming of the Moshiach.

But where is this pillar? Several years back, a long line of concrete road blocks were set up in front of Kever Rachel as a protective wall against Arab stones (this was before they began shooting bullets ...). Even worse, Rachel's Tomb is hidden by 15-foot concrete barriers, topped by guard towers and patrolled by soldiers in battle gear. The "security wall" turned Rachel's Tomb into one big maze. 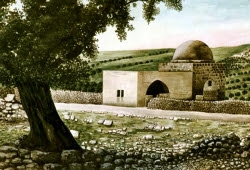 Everyday we pray, "חדש ימינו כקדם Renew our days like they were before..."

G-d hears our prayers and cries... The organization "Yesh Sachar Lepulatech 'יש שכר לפעולתך', announced that it received 5 million dollar donation to reconstruct the nostalgic appearance of Kever Rochel. As soon as all the needed permits are signed, construction will begin and the depressing barricades around Kever Rochel Imenu, a'h, will be removed. Kever Rachel will once again be returned to its original splendour form.

The promise of HaShem to Rachel Imenu "And your sons shall return to their borders" will be fulfilled more ways than imaginable...

This is an additional clear sign that we are very near the redemption because just as our forefathers passed by Rachel's Tomb on their way to exile in Babylonia, when Moshiach arrives to redeem us, we will be led back to Eretz Yisrael by way of the original Rachel's tomb.