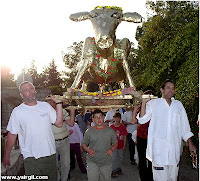 שר ילכו לפנינ.. ד ויקח מידם, ויצר אתו בחרט, ויעשהו, עגל מסכה
Exodus 32: When the people saw that Moshe (Rabenu) delayed to come down from the mountain, the people assembled about Aaron and said to him, "Come, make us a god who will go before us... statue of a calf... then they said, "Israel, here are your gods who brought you out of Egypt."

The Erev Rav were converts who joined the Jewish people when they were leaving Egypt. Our sages teach us that they were not sincere and

continually cause the Jews to rebel against G-d. They were responsible for the most grievous sin the Jews were ever involved with, the sin of the Golden Calf. They were also the driving force behind every major movement within Judaism to undermine our commitment to G-d and His Torah. They are power-hungry, selfish opportunists who seek power and glory at all costs, and will stop at nothing to attain their goals.

...“The Erev Rav” reveals the dark spiritual forces that propel certain Jews to turn against their own brothers and sisters.

In the Holy Land, they hold festivals in cities such as Eilat, Ein Ohd, Ramat Gan, etc., and continue displaying the Golden Calf as god.

Zohar (Book 1, 25a): “During the fourth and final exile the Erev Rav will be powerful leaders. They will bring the weapons of ‘Hamas’ over the Jews. Regarding this development scripture states: ‘The Land is full of Hamas because of them (Genesis 6:11)’. They (i.e., these members of the Erev Rav who are currently the leaders of Israel) are Amalekites.” (Amalek is the most evil nation on Earth slated for complete obliteration after Moshiach comes).

Following the example of Moshe Rabenu, zs'l, of burning the calf, Orthodox Jews set fire to the 'golden calf' chair that was displayed in the National Park in Ramat Gan, as a show of protest against the Israel Erev Rav Government culture.