Agudah of America gave a letter today to Israel chief Rav Yona Metzger Shlita stating: "If the impure parade will take place as planned, we will instruct all Jewish communities all over the 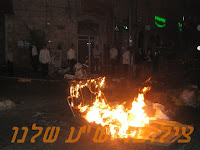 In Yerushalayaim and Bnei Brak protests have began and 2 protesters were arrested. To view last nite's protest, click HERE.

100,000 people are expected this Sunday, June 17, Rosh Chodesh Tamuz to join Tefillot throut the streets of Yerushalayim to protest and prevent the impure parade.