Another shame parade? What is it with the Sitra Achra? Doesn't it ever give up? They just had one Erev Shabbat in Tel Aviv. 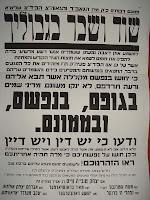 Badatz rabbis distribute message that 'all sinners' involved in Jerusalem pride march will 'feel a curse on their souls and evil will pursue them.' Orthodox community plans mass protest against parade next week; organizers expect 100,000 protestors.

The Orthodox Righteous Court of Law (Badatz) have placed a curse on the organizers and particpicants in the gay pride parade scheduled to take place in Jerusalem next Thursday. The curse also applied to police forces that will secure the event.

Rabbis from the Orthodox Edah Haredit sector (Badatz) published a message in Jerusalem on Sunday which read: "To all those involved, sinners in spirit, and whoever helps and protects them, may they feel a curse on their souls, may it plague them and may evil pursue them; they will not be acquitted of their transgressions from heavenly judgment."

The Edah Haredit is an extreme body which has declared ideological warfare against the "heretic Zionist government." Its members shun Knesset votes, do not carry Israeli ID cards, and refuse allowances from the government budget.

Edah Haredit rabbis warned Sunday that anyone who participates in the gay parade will be hurt "in body, soul and finances." The rabbis threatened participants citing the "success" of previous curses: "Know what happened to the evil persons who were cursed, and thus feel in your souls that your end will be bitter," the statement read.

"We are in a grave situation," wrote the editor of the Edah Haredit mouthpiece, Rabbi Shmuel Pappenheim. In placing the curse, "The Badatz acceded judgment to the heavens; they will be dealt with there."

Community members expressed despair and resentment against their treatment by Jerusalem's police force. In just this past month, they said, Jerusalem district police chief Ilan Franco met with Badatz members four times, yet failed to make any viable offer.

The meetings left the community feeling that "there was no one to talk to," Pappenheim said, and led them to the last resort option of placing a curse on the parade participants.

On Sunday of next week members of the community are planning to launch protests against the pride parade. A mass demonstration is scheduled to take place on Jerusalem's Bar Ilan Street, which will "shock and agitate" the public according to posters. The protest's organizers expect some 100,000 people to show up.