Tomorrow 11 Av will be a year since the angels of destructions dressed in black came into our homes, business, schools, shuls, and community and tore apart everything we build, [+/-] show/hide text
physically 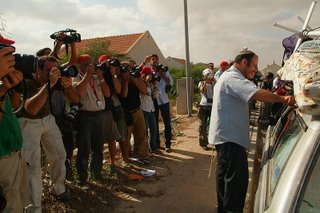 לא נשכח - WE WILL NOT FORGET

Eicha: “How does She sit in solitude! The city that was full of peoplehas become like a widow.”

It is chillingly cruel that the destruction of Gush Katif came just 3 days after we mourned the destruction of the first and second Temples, while they are different in many aspects it all boils down to one thing,and that is, that while the Jews in Jerusalem, Beitar and Massada fought and died with pride as true Jews. 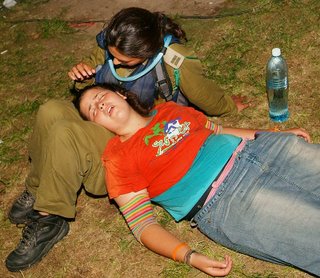 It is mind boggling to comprehend that a torn, starved, and worn out ghetto Jew, with nothing to gain, staged a resistance in the Warsaw ghetto. Fighting with a few barely working pistols and homemade weapons these young warriors managed to fight off the all-powerful German army for an entire 2 weeks! These famished ghetto yidden with no knowledge of modern fighting managed to rise up and fight. The lion of Judea roared once more! G-d’s name was sanctified, the nations of the world looked at them with awe and they became an inspiration for all Jews until this day!

YET we Jews of Israel, the modern Jew the Jew who has thrown off the ghetto, the so-called proud Jew, the Jew that has its own army. We did not even accomplish what our starved brothers did. The entire Gush Katif fell in 3 days! A disgrace unto G-d’s name is what 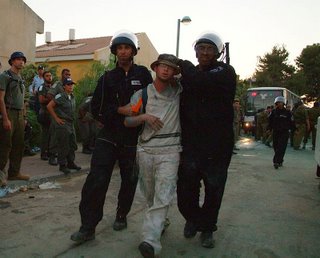 Just as the Jews during the first Temple refused to listen to G-d's prophets and instead they killed the prophet Zacharia, when Jeremiah the prophet came to the King Yehoyakim with the message "repent or Judea will fall" the King ordered him to be killed!

We are the same Jews that mocked Zev Jabotinsky as he screamed "Jews get out of the furnaces of Europe" .”And you shall know that a prophet and priest has dwelled in your midst" this was written in regards to Jeremiah yet these same words hold true for Rav Meir Kahane, hi'd, who like his forefathers scream of the downfall and destruction of Judeaun less we awaken... "My eye sheds rivers of water at the shattering of my people". 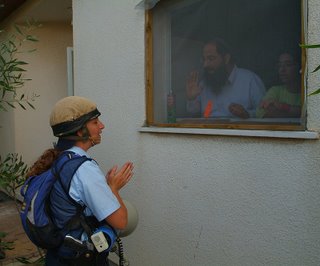 Yet we continued on as a disillusioned blinded nation, a people unwilling and unwanting to see or accept the truth. WE are to blame for becoming masses of asses. It is us at fault who for 2 years mouthed the words"with love we shall win" did we honestly believe that? Did we honestly believe we could overcome this destruction with yet MORE demonstrations? Woe unto us for the apple has fallen so far from the tree. Woe unto us for becoming a nation of cowards. 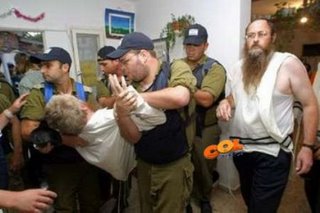 Did we really trust aso-called leadership who has a long dirty history of betraying its people? A leadership that hands over its people to the police...

3 times a day in the amida we say "and to the informers there is no salvation"when the brave warriors of Judea arose and screamed, “Enough, we must shut down the country, we must get soldiers to refuse orders”. The so called Rabbis and leaders screamed "how dare you say that!” FRAUDS! Do they really think that by dancing and singing songs we would beat an evil regime? When my brave brothers and sisters sewed on the orange Star of David to their clothes the clowns at the Yesha council shreiked bloody murder. "How dar

e you compare this to the holocaust... we must win public support".

The holy bible of the resistance was LO ALIMUT (no violence). We watched as 250.000 Jews gathered in kikar rabin almost 2 years ago under a banner "the Likud does not want to compromise". Did we believe this garbage? Did we believe that Sharon needed to be shown the light? Did we believe in bogus leaders who hired private security thugs to FORCEFULLY boot anyone with a sign they deemed provocating? "Woe unto us for we have sinned".

Did we truly believe a human chain through Israel, the longest in documented history, would actually soften Ariel-Pharaoh’s hardened heart?As the country continued its plunge into maddening insanity did we Jews unleash 10 plagues? NO instead we sat around singing songs! “Democratically it must be won” screamed the so-called leaders!"

Did not our forefather Jacob pray AND prepare for war when he went to meet his brother Esau? But no our leaders could not resist... they must disown all Jews unlike them at all costs! Our Rabbi's poskined "it is forbidden to refuse orders" and the Yesha Council attacked anyone who demonstrated unlike them, Lubavitch Rabbi's condemned all those that blocked roads.

Did not the Lubavitcher Rebbe zs'l, scream hundreds of times till he turned purple about the dangers of giving up ONE inch! "Woe unto us for we have sinned"

We blindly followed a pathetic leadership filled with traitors, we were told over and over again until we became disillusioned. The great propaganda machine of the Yesha Council blinded and fooled us! As we brave Jews settled into the former Palm Beach hotel, with no water,toilets, electricity, or beds, with mosquito's tearing the flesh out of us. But we did not complain... as the yesha council launched a smear campaign against us "extremists" as they sat in their comfortable homes.

We worked around the clock building. and yet the height of the insanity reached its crescendo on Shabbat one week. "Jewish extremists attack muwasi arabs on Shabbat" the headlines blared.... GARBAGE I scream!! does any sane person really believe the religious youth attacked arabs with rocks on the holy Shabbat ?!?!

We saw 40,000 Jews were boxed into Kfar Maimon surrounded by barbed wire fences as the clowns of Yesha"negotiated" with the police. “NO”, they screamed as people wanted to march forward… "we will only go when the police issue us a permit". Is there no end to this insanity ?? Yet it happened again the next week and as I sat in Neve Dekalim I knew that we were doomed... our leaders had sold us out and our people had fallen into their trap... a mega demonstration in Kikar Rabin, Tel Aviv. 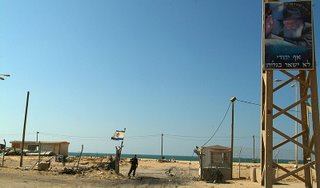 Did anyone with a IQ above vegetable level really believe that would stop this disaster? And we saw yet ANOTHER march... where the so-called guides ran these brave warriors right into the police! G-d forbid to shut down the country they demanded! As I sat on the stone floor on the 9th of Av mourning the great Temple in Jerusalem, I also mourned the destruction of the Jewish people in 2005.

We, who sold our souls and bodies in the name of democracy.
We, who trembled in awe from the holiness of Zionism the untouchable pure army of Israel.
We, who follow rabbi's who accept bribery.. the Torah writes "do not obstruct justice or accept bribes.... for bribery covers the eyes of the sages and distorts the words of the righteous." Yet anyone who bothers to move on to the next verse will encounter "justice you shall pursue in order that you will live and inherit the land that which the L-rd your G-d has given to you."

As the prophet Jeremiah wrote further on in Eicha "Remember O L-rd what has befallen us, look and see our disgrace, our inheritance has been turned over to strangers, our homes to foreigners". And yet as we tore our shirts in mourning on August17th we mourned the fall of the proud Jew, the bumbling fools at Moetzet Yesha dare have the chutzpa to talk of victory! "We need to find common ground now", they say..

My eyes have dried up, I have cried all my tears. Tears for my people who were betrayed by their "leaders". Know now Moetzet Yesha, I point my fingers at you and blame you and your cronies for the Expulsion of 2005, you and your thugs who scream "no violence" but do not hesitate to beat us and choke those who dared touch the “holy” vehicles of the Army, and the silent rabbi's who failed in their duty to warn their followers of the danger.

"Gaza will be deserted and Ashkelon will become a waste land, they wil lexpel Ashdod's residents at noon, and Ekron will be uprooted" (Zephania,2 - 4) Ekron is somewhere around the Tel Aviv area.