To The Beautiful Families of Gush Katif

Last year at this time, we were trying to enter Gush Katif. No one believed that we will succeed passing the Kisufim check point, even the people I was with were very doubtful. I kept telling them over and over again - I believed 100% that not only will we succeed entering the Gush, but we will be "flying" into the Gush on a red carpet.[+/-] show/hide text 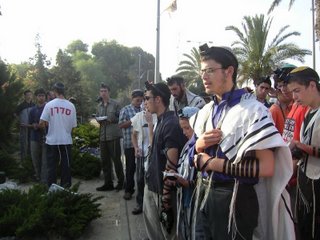 On Av 5 (Arizal's Hillula), I called about 10 bus companies to pick us up at the Kibbutz we stayed overnite. Finally 1 company agreed to drive us but without the guarantee we will enter the Gush. They said that if we don't enter the Gush, we will still have to pay the full amount. We were less than 10 kilometers aways from the Kisufim Junction and they quoted us a ridiculous price of $500 USD. Having no choice, we paid the price and snuck on the bus 2 young girls from the Kibbutz.

We got to the Check Point and a high ranking officer named Chalid (Druzi) calls me off the bus. 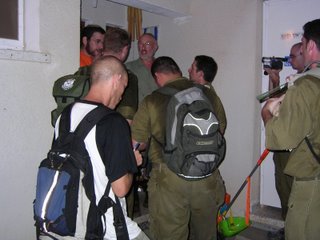 He says he will let us thru on 3 conditions:
1. On a piece of paper, everyone will write their name with passport number;
2. We will all enter the Gush and we all must exit (he didn't give us a deadline)
3. To tell the residents of the Gush that they are the nicest people in whole of Israel and he's so sorry that this is being done to them. He will personally try to sabotage the disengagement by convincing IDF soldiers not do follow orders too efficiently. 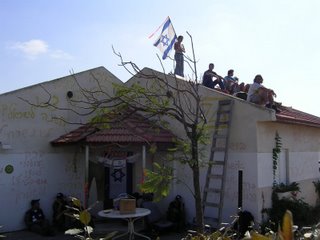 I gave him the piece of paper with all our names and passport numbers, didn't tell him anything about when we will leave the Gush, and told him that I'll tell his message to as many people as want to hear it. He wish me luck, didn't check the bus or its boarders, and although the bus driver didn't have authority to enter the Gush, let him drive us inside. We were the last group ever that was given permission to enter Gush Katif.

The bus that took us into Neve Dekalim had red chairs with red carpet on the floor to match. 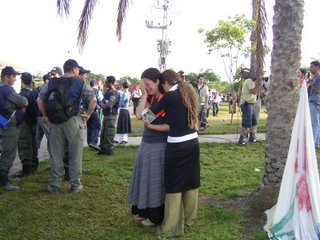 As soon as entered Neve Dekalim, a'h, I went with a few people to a store to purchase Ner Neshama for the Arizal. We lit candles for the Arizal and thanked HaShem that we are zoche (merited) to be one of the lucky ones to fight the Satan.

When we were expelled from the Gush, I went to Tzfat (tired, exhausted, physically and emotionally weak) and cried so much by the Arizal's Kever to HaShem. While davening, I get a phone call from family Vaaknin, residents of Neve Dekalim, they were all crying hysterically and I could hear more crying in the background. 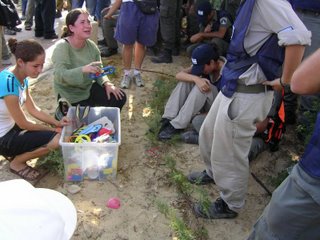 Between the tears, they told me that they had just been kicked out of their home and were on the way to Yerushalayaim (not by choice).

I told them that I'll lay the phone on the Kever of the Arizal and he'll take their tfillot (prayers) directly to the Kise HaKavod. Their pain will not be in vain.

To all the wonderful families of Gush Katif, your pain was not in vain. HaShem hears our cries and sees our trouble - HaShem is crying with us.

The time of pain will soon pass, and HaShem will be smiling and laughing with His children, Bnei Yisrael, AMEN!