The Story of Elkana, a'h

King David united all the Jews and established that the Beis HaMikdash will be built in Jerusalem. Before that time, in the days of the Judges, the Mishkan was in Shilo.[+/-] show/hide text

The Mitzva of Oleh Regel (pilgrimage to G-d's Tabernacle) became nullified due to the dangerous route of preying robbers and thieves of the Pelishtim (Arabs dwelling in Gaza). The Pelishtim were constantly warring with the Jews.

Elkana took his family and would take a different route every chag (holiday) and camp in the middle of the city or village. The people would ask him where he was going and he replied "to the Mishkan, Aron HaShem (where G-d's Shechina dwelled) in Shilo." Elkanah called to them to join and would say “Let’s go up to Shilo! Let’s go up to the mountain of Hashem! Learn how to serve HaShem from the Canaanites, who make pilgrimages to their idols, although they are empty and worthless. How much more so then should we make pilgrimage to the Ark of the Covenant of God, for He is a living God!'"

They went from city to city and from settlement to settlement in order to bring the entire Jewish people back in repentance.

Elkanah, the father of Shmuel HaNavi, merited such a great son because he revived the Jewish people to repent. 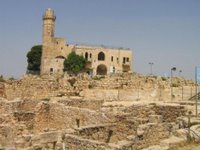 May the merit of the tzaddik Shmuel HaNavi protect us all, Amen.
| 0 comments