All the signs are pointing to the Final Redemption. The war in the North of Israel, the Rabbanim and Mekubalim of this generation are begging us to do Teshuvah before the Gates of Teshuvah are shut, young children saying unusual words such as Moshiach, Gog UMagog, Geulah, people having dreams, Autistics giving us powerful messages, etc.[+/-] show/hide text

BUT DID YOU KNOW THAT IN JULY 28, 2006 (today) PEOPLE WITNESSED TCHIAT HAMETIM - RESURRECTION??

Earlier this morning, a family from Ashdod arrived at the cemetery to bury their mother. Their mother was hospitalized in Kaplan Hospital and her condition got worse and she passed away. The Chevre Kadisha asked the family to get from the Department of Health Certificate of Death so they can bury her in Ashdod (in Israel, a person gets buried for free with proof of residency and Certificate of Death). 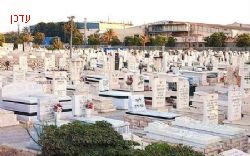 The family and Chevre Kaddishe prepared the burial for the woman and family and friends began arriving to the cemetery to give the woman last respects. Meanwhile, one family member went to the Dept. of Health to get the Certificate of Death. While he was waiting to receive the Certificate, he gets a phone call and he is told to go to Kaplan Hospital.....the mother revived and is alive.

Mr. Avi Deri, Zaka, Hatzalah volunteer and works in Chevre Kaddishe says "A family arrived to bury their mother that passed away in Kaplan Hospital, I sent him to get Certificate of Death and I told him that as soon as Chevre Kaddishe finishes the Tahara of the Niftar, we will begin the ceremony of the funeral. An hour later, I get a phone call and this family is canceling the funeral because the dead mother is alive. I never encountered in my life such a thing. I have nothing to say except I just witnessed Tchiat Hametim". (resurrection)