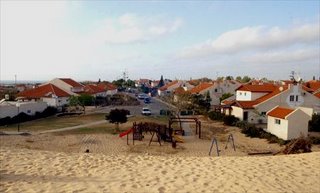 A few days ago a woman arrived at Bet Chabad in Yeshuv Nisan, administered by HaRav Yigal Kirshenzaft, one of the expelled refugee of Gush Katif. The woman lives not far by and she came to ask for apology "I have come to ask from you forgiveness! Now I see what is happening and felt the urge to beg you, the refugees of Gush Katif, for forgiveness. I'm sorry that we did not fight for you... How were we so blinded? The woman left a donation with tears rolling down her face.[+/-] show/hide text

The greatest enemy to man is the yetzer hara (man’s innate nature to follow the wrong directive). The problem then is, that man does not recognize the Yetzer Hara as an enemy. The Yetzer Hara is constantly alert in an effort to mislead his victim, and to persuade him/her to go off the proven path of Torah.

Rabbi Menachem Mendel, of Kotzk, was walking down the street with his friend Reb Yitzchak, of Vorki, when they encountered an old woman who was peddling knives. Reb Yitzchak wanted to purchase a small knife for himself, for which the women wanted four coins. Wanting to save some extra money, he offered her three coins for it. His friend, Rabbi Menachem Mendel, called him by his nickname, “Itshe! The Mishne teaches us: ‘Do not converse excessively with women.’ Now isn’t that worth one copper coin?” This is an excellent example of guarding ones self so as not to fall prey to the evil inclination.

Rebbe Nachman says, “If you believe you can damage, believe that you can fix. There is not a sin in the world that you can’t repent for. The Rebbe also says that no matter how far you are from HaShem and Judaism you can always return to the ways of the Torah. Of course the Satan doesn’t want you to know this and even if you do know it, he tries to give you doubts about it and make you loose hope in ever truly repenting.

One shouldn’t fear the evil inclination; rather they should be aware and cautious of its tricks, so as not to fall into its traps. When you fear anything, you cause yourself to loose control. The only thing to fear is HaShem.

The Vilna Goan says, “A person who is wise in his eyes will not make positive changes. Since he thinks he is correct, he is not aware of his negative and counterproductive behavior. But if a person is aware of what he is doing wrong, then there is hope that he will correct himself”.

A man once came to Rabbi Michel of Zlotchow explaining that he had inadvertently done something, which was forbidden to do on Shabbos. He asked the Rabbi what he must do for his Teshuvah to be accepted. Rabbi Michel then explained to him the severe gravity of violating the Shabbos and that Shabbos is equivalent to all the other six hundred and twelve Mitzvos. His sin was a very serious one, and he therefore prescribed for the man a stern remedy of fasting and self-mortification as his penance.

This man thereafter came to the Baal Shem Tov and he told him that the fasting that was prescribed by Rabbi Michel was not necessary. Rather he should just provide the shul with candles for the pulpit. The man went out and bought a candle that were made of tallow from animal fat as that is what they were made of in those days. A dog then came and ate them, walking through an open door in the shul. He then replaced the candles but whenever they were lit they blew out. This he took as a divine signal that his Teshuvah was rejected and he told this to the Baal Shem Tov.

The holy Baal Shem Tov understood that the problem was due to Rabbi Michel’s interference, as he believed that the stricter penance was necessary. He then sent a message to Rabbi Michel inviting him to come for Shabbos.

Accepting the invitation, the Rabbi set out on the road Wednesday in order to give himself enough time to arrive comfortably before Shabbos. The trip was constantly interrupted with one mishap after another. An axle of the wagon breaking, a wheel falling off, stormy weather and the driver getting lost. Finally Rabbi Michel arrived late Friday right before Shabbos. When he walked in to the Baal Shem Tov’s home, he saw the Rebbe in his garments, the table set and he immediately fainted. The Baal Shem Tov revived him and explained to this pious man that he had accepted upon himself the holy Shabbos a little earlier and that he had not violated the Shabbos. He then said to Rabbi Michel, “When you thought for a moment that you had violated the Shabbos, how distressed were you? Don’t you realize that if the awareness that one has sinned causes a person to feel deeply distressed at having transgressed the word of HaShem, this is the true essence of Teshuvah? There is no need for additional self-punitive behavior when regret has already occurred. This man who came to you had already experienced the pain of the awareness of having transgressed. Therefore, all that was necessary was a small action of penance because the true Teshuvah had already taken place.

Chas v Shalom you fail your test, you must know that HaShem is still there. No matter how far you may have fallen He is there to sustain you. That is, if you chose to let him.

Failure is common as we are only human beings made of flesh and blood. If you dwell on your sins they will only come to haunt you even the more. After making a mistake, you must begin anew. This doesn’t mean one should forget completely about it but for the time being it might be best to put it aside during the moment of weakness. Pull yourself back up and then repent as soon as possible.

May God in His mercy lead us in the right course and guide our steps and have the wisdom to make the right choices.