The Ben Yehoyada explains that hurricanes are created by loshon hora. The following is a short synopsis. See below for the original.
The connection between hurricanes and the sanctity of speech can be seen in the pasuk in Amos (4:13) which says “Hashem creates mountains and storms to teach a person what he has spoken.”
The posuk starts with Hashem creating mountains and ends with mentioning the speech of man.
Why?
Hashem created giant mountains whose sole purpose is to diminish the winds of His great storms. Without those mountains, chas v’shalom, when hurricanes strike they would totally destroy all buildings and houses. Instead Hashem first sends the winds to strike the mountains, which diminish their great strength, before “allowing” them to strike places where people live.
But why, asks the Ben Yehoyada, is there a need for such great hurricane winds in the first place?
He answers “Hurricanes are created by the aveira of improper speech, loshon hora.”
The Ben Yehoyada teaches us that after witnessing a great hurricane, every person should learn great musar from it, to guard themselves from the sin of improper speech. 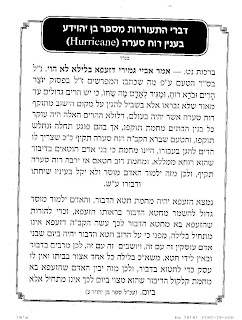