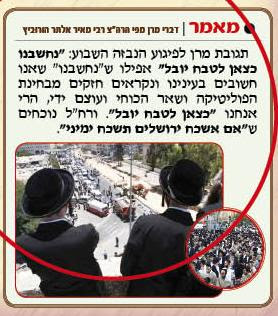 "נחשבנו כצאן לטבח יובל We are considered as sheep to be slaughtered."
"Even though we 'consider' ourselves to be important in our eyes, and we seem to be politically strong and all the rest of כוחי ועוצם ידי (with my strength and power), we are כצאן לטבח יובל, like sheep to be slaughtered.
R'L, (Merciful HaShem), people that attend "אם אשכחך ירושלים תשכח ימיני", If I forget you, O Jerusalem, may my right hand forget her skill."
The Rebbe Shlita is hinting that the terrorist attack is a result of the abomination parade that caused desecration of Yerushalayim and because of the political ministers that are joining efforts in carving and giving away holy Yerushalayim.