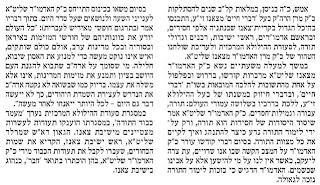 The Sanz Admor Shlita spoke for over 2 hours, giving chizuk (inspiration) to Am Israel. Towards the end, he said that Am Israel is in great danger, "עת צרה ליעקב, time of trouble is for Yaakov" and we have nothing to lean on except HKB'H. The Admor emphasized that in the zchut of learning Torah, we will be zoche to be redeemed.

The Admor Shlita also spoke about current events and said, "The entire world knows the true intentions of Iran, Syria and all the arab countries' plot are, yet everyone is silent. No one is implementing to prevent the disaster that will befall on us, c'v. Anyone that relies on the United States to help and protect Israel is only fooling himself. Just as during the Holocaust the United States did nothing to prevent or stop the murder of 6 million Jews, they will do nothing about it now. Maximum, they will sigh after it happens."

In other news; during Chol HaMo'ed Pesach Binyamin Golden said the following:
"Begin preparing, but not just prepare with food, begin mental and spiritual preparation for Moshiach. The majority of tests will be with one's Emunah. In Eretz Israel there will be the biggest trials -- the fears will be awesome.

"In the diaspora, cruel and harsh dangers will occur. No one, from any direction will save us - there is no one to depend on except HKB'H.