When President Bush visited Israel the first time as the president of the U.S., it was in January of 2008. Joining him on this historical trip was of course, U.S. Secretary of State Condoleezza RICE in efforts to push Israel to create a Palestinian state.

When one connects world events to Israel of January, 2008, it is uncanny that at the SAME time, the sudden global "RICE" crisis began...

The secretary's last name is NOT a coincidence and says it all - Rice... RICE's 'Middle East 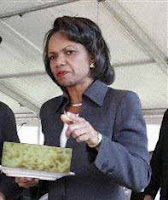 Peace Plan' effected the whole world by the sudden RICE crisis and for the first time in history the impact is spreading to the developed world. More than 73 million people in 78 countries are effected by the global food crisis.

In Hebrew, Rice is Orez אורז and its gematria is 214, same as "אלה אלופי אדום These are the chiefs of Edom..."

You want to know the cause for the RICE crisis? The Torah tells us...
אלה אלופי אדום... הוא עשו, אבי אדום.
"These are the chiefs of Edom... This is Esau the father of the Edomites."

Rice in Hebrew is spelled רייס and its gematria is 280 same as "למען ידעו So that you may know" .

If you still doubt the obvious connection, Navi Yeshiyahu (zs'l), tells us in Chapter 45;6"

"למען ידעו, ממזרח שמש וממערבה, כי אפס, בלעדי: אני יהוה, ואין עוד"
"So that you may know from the rising of the sun, and from the west, that there is none beside Me; I am the HaShem; and there is no one else"