Tragedies in Israel Because of Rebellion 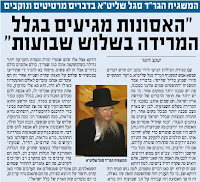 "The secular in this land place our lives in danger. Here, in Eretz Israel, there is more danger than anywhere else in the world because Eretz Israel is holy. They (seculars) place us in danger because they rebel against the 3 oaths that was promised to HaShem. Only the Torah and observing Mizvot protects Eretz Israel as ChaZaL teaches us, "If the nations of the world would have known what the Bet HaMikdash offered, they would have placed guards around it to protect it from being destroyed."

"Now they want to destroy the Torah and they don't understand that it's the Torah that protects them. If they would know, they would give everything in order for people to learn Torah. In spite, they are hunters."

"I'll tell you the truth what I think, you saw the massacre in the Yeshiva, r'l? Why did it specifically happen there? This is from Shamayim. Why did the evacuation from Gush Katif happen? Because in fact, the prosecution is much stronger on those that observe the Torah and its Mitzvot when the conception השקפה is not where it's supposed to be. We are all loved by HKB'H but it's not a simple matter at all."

"Someone came to tell me that they were notified about the massacre and a while later, they were notified that there is a meeting in the Yeshiva auditorium as if nothing happened. He came to me all shaken up. I asked him, "Why are you shocked,?" and he replied, "The leaders here don't care about anything. For a bit of honor, they will kill a few."

"Just like what that wicked man and the one with one eye did to us during the Sinai war. In order for them to be recognized and placed in history, they kill. How much did the Satmar Rebbe cry for the spilled blood (the sefer Al Hegeula Vehatmura written by the Satmar Rabbi , Rabbi Yoel ZaTsal, is based on those 3 oaths). But it continues, each has their own personal agenda and they don't care about anyone else. This is the worst, no better than the worst nation's behavior. It's horrible, they took over the country and they do whatever pleases them, Go.d have mercy on us."

"I personally heard from the Steipler Rebbe, zs'l, that we should know that the last Galut is Erev Rav. Why are they pro-Arabs? Because they are from the Erev Rav and identify with the Arabs. (NK: ערב רב and ערבי is similar spelling). They say, "Return lands to them." The leftists say, "It's not right to banish the Arabs that were here first."

"The foundation of this is atheism. Why do they identify with the Arabs and are so gentle with them? Because they deny that this land belongs to Am Israel."