As a result of the great danger and critical situation of chopping up Eretz Israel and gifting it to the enemies, including chopping up Yerushalayim, SMolmert's coalition can do this because the coalition depends on Shas members. 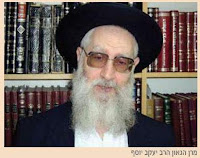 The son of Maran HaRav Ovadia Yosef Shlita is sharply attacking Shas political members. "Shas are traitors. They are betraying the Chachmei HaTorah (learned men) by staying inside the coalition."

Maran HaGaon Rabbi Yaakov Yosef Shlita, the firstborn of Maran Ovadia Yosef Shlita had the following to say about Shas: "We hope they sober up and quit, just as they promised. The decision of the Chachmei HaTorah is they MUST QUIT THE COALITION IMMEDIATELY. The government is negotiating Yerushalayim under terrorist fire. As long as Shas remains in the government, they are betraying the final decision of Chachmei HaTorah. They are endangering all of Am Israel."

"Prior to the disengagement from Gush Katif, we warned that missiles will fall in Ashkelon and unfortunately, we now see it happening. We are now warning that if they don't quit the government right now, missiles and rockets are going to fall on Yerushalayim and cities surrounder her. Every city in Eretz Israel is in great danger."

Shas responded that when it happens, (chopping up Yerushalayim) they will quit the government. The Rav says on this, "What are Condi Rice and minister of foreign affairs Tzipi Livni discussing? Why are SMolmert and Abu Mazen meeting frequently? The MaFDal also promised the same thing that if Gush Katif will be evacuated, they'll quit the government. They brought the destruction of the disengagement of Gush Katif and Samaria. It's like someone's son is about to be butchered and the son is already tied up but the father says there is still time. The knife is being sharpened and the father claims there is still more time. Only a fool and an imbecile will wait till the knife touches his son's neck. הבא להורגך השכם להורגו (Halacha: If someone comes to kill you, you kill him first)."

The Rav continues and says, "If Shas will quit the government right now, they will buy for themselves Olam Haba. It will prove to the general public that they are fighting for Yerushalayim and Eretz Israel. Everyone will benefit if they quit the government. Not one ever gained sitting with a government that gave up holy land."

The Rav warns, "I am saying this very clearly: SHAS will never forgive herself if they will not quit the government immediately. Every second inside the coaliting is very very dangerous. One cannot know what tomorrow will bring, especially that the President of the U.S. is arriving Israel very soon again."

UPDATE:
The day after Jerusalem Post reported that secret talks have been taking place between the Israeli and Palestinian negotiating teams on the issue of Jerusalem, Arutz 7 received information that a TOP SECRET CONFIDENTIAL document proving that negotations of Yerushalayim is underway was shown to Eli Yishai, Shas Chairman.

The TOP SECRET document was shown to Yishai by a top senior of the government arena.

Immediately Yishai called SMolmert and demanded answers. The PM was very surprised that the CONFIDENTIAL TOP SECRET document was shown to Yishai.

This information was also given to Yishai. One of the Shas members commented that the conclusion is that Shas must quit the government within a month. But spokesman for Shas ruled that all these findings are unfounded and have no true basis.

* The last governments in Israel are Erev Rav.
* The economy will deteriorate.
* The Erev Rav Gov't will deceipt the nation and secretely weaves dangerous deals.
* More trouble will surface from the Arabs regarding the green line and their rage will burn interiorly and exteriorly.
* Yishuvim (settlements) inside the green line will need to protect themselves.
* They will hand over holy places, including Yerushalayim, and this will cause a 'storm' in Am Israel.