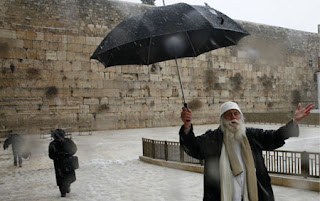 In Israel, Mekubalim anxiously wait annually for the purifying snow but warn: Not every person can roll in the snow naked, a person's body must be very pure in order for the body not to be harmed. Only a Tzaddik's body that is very pure cannot be harmed".

The excited Mekubalim are preparing to roll in the snow. Rav Batzri Shlita, Rosh Yeshiva "HaShalom", said on the Orthodox radio, Kol Chai, that the Yerushalmi Mekubal HaRav Salman Mutzafi, zs'kl, used to say, "Snow days are holidays for the Mekubalim."
He explained that Tzaddikim roll in the snow 9 times, but warns, "There is no permission to do this, only for a person that is holy, a Tzaddik that is completely separated from this world's pleasures. To roll in the snow 9 times naked back and forth is mortal danger. Entrance into the snow without any protection causes dangerous burns and can cause losing breath."
He emphasized that, "it's prohibited from a person to do something that is above his achievment". As a recommendation for people that sin or in general, those that want to do the snow tikun, one should take snow in the palms of the hands and pass it 9 times over his arms and 3 times over his forehead. Passing the snow over the forehead is a talisman for improving the memory.
HaRav Batzri Shlita, son of the honorable Mekubal HaRav David Batzri, said that his father used to fill snow in pails for the benefit of people that came to do Tikkunim. He also said, "I see Tzaddikim rolling in the snow that don't get harmed, they are healthy and strong like lions".
The Mekubalim explain that, "Rolling in the snow naked is a Segula (tallisman) for personal tikun (correction) and for Am Israel on the following 4 sins: Using Kabbalah 'magic', having relations with a now-Jewess, having relations with nida, and for homosexual relations. Just as there is Gehenom of buring fire, there is a Gehenom of freezing snow. The freezing Gehenom was created to correct sins that needs cooling... The reason for rolling in the snow saves a person from the Gehenom of snow.
http://www.nrg.co.il/online/11/ART1/690/191.html