Save Us From Their Wicked Plans

Rabbanim of Eretz Israel wrote a special Tefilla for us to say to help annul the terrible decrees hovering over Am Israel, due to Bush, Condi, and (sm)Olmert's plans. 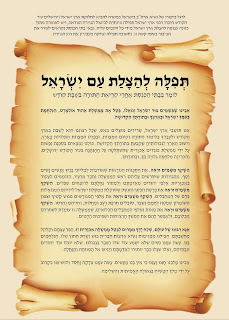 HaShem, save us from the smOlmert goverment that wants to chop up the Holy Land. We want to continue to be able to live in Your holy Land but find our lives endangered by non-Jews who have taken over the land. They publicly announced a war against HaShem and His Torah.

HaShem, look from Above and see the danger hovering over us. The smOlmert government and his party wants to destroy and kick out thousands of Jews out of their homes and give our homes and land to the enemies.

Please Creator of the World, send Your hand from Heaven to cancel the plans of US President Bush and his Secretary of State that are at war against us.

HaShem, make a miracle for us so no more Jews will be kicked out of their homes and those that were expelled from their home should be able to return to their homes.

Heavenly Father, do Chesed with us and and redeem us. Send us Moshiach Tzidkenu and redeem us in the final and complete redemption, Amen.