More than four times the number of natural disasters are occurring now than did two decades ago, British charity Oxfam said in a study Sunday. 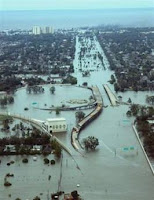 The world suffered about 120 natural disasters per year in the early 1980s, which compared with the current figure of about 500 per year, according to the report.

"This year we have seen floods in South Asia, across the breadth of Africa and Mexico that have affected more than 250 million people," noted Oxfam director.

"This is no freak year. It follows a pattern of more frequent, more erratic, more unpredictable and more extreme weather events that are affecting more people."

She added: "Action is needed now to prepare for more disasters otherwise human development will go into reverse."

Floods and wind-storms have increased from 60 events in 1980 to 240 last year, with flooding itself up six-fold.


The Oxfam study was compiled using data from the Red Cross, the United Nations and specialist researchers at Louvain University in Belgium.
http://www.breitbart.com/article.php?id=071125143308.tk2ewf60&show_article=1